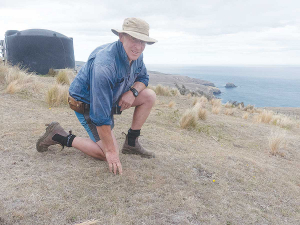 Banks Peninsula's big dry is not yet an official drought, but it has "so far" cost sheep and beef farmer Mark Hutchinson somewhere in six figures.

Even if the rain returns next year, the loss "will probably still have a 2 in front of it rather than a 1," he told Rural News.

"You don't want to work things like that out, sometimes."

Hutchinson farms about 1,000ha of rugged windswept land on the isolated south side of the peninsula, where there is nothing but ocean between him and Antarctica and the best radio reception is from Timaru. It's the farm he grew up on, but he has never seen it this dry in the 30-odd years ha has been farming in his own right.

"It's been building for near to two years, you'd have to say, and we've really hit the wall now."

Like others on the peninsula, Hutchinson is having to cut stocking rates and bring in feed, while watching lambing percentages and live weights fall.

On the day Rural News visits, Hutchinson had sent 35 cows to slaughter and had a mob of 80 young cows in the yard waiting to be trucked to grazing off-farm.

Hutchinson expects to keep about 30 fewer calves this winter than he had planned and may have to send away for grazing as well.

He says he was lucky enough to get 70mm of rain between Christmas and New Year, which gave a "fresh pick" for three or four weeks and allowed his cattle to put on a bit of condition, but his calves are still 40-50kg lighter than normal.

"Because the spring was so tight, so tough, the cows never milked properly," says Hutchinson.

Lambing percentages have also suffered. Hutchinson says 70mm or more rain would freshen the land up but it is now too late to get any bulk feed before spring.

Rex Gebbie, manager of Little River-based Banks Peninsula Transport, says they are busy with their own fleet. He also has a couple of extra trucks from associated company Ellesmere Transport, both bringing feed into the peninsula and taking stock out for grazing or slaughter.

He says the situation for farmers is very bad and it's getting harder to source feed.

"I sourced a whole lot but it's starting to run out, so we have to go further afield.

"Darfield's as far as I'm going so far, and Rakaia, but we're going to be sourcing it further the way things are going."

Some farmers are booking two or three units a day and it was getting harder to meet demand.

"We're bringing in barley - not hay because we can't find any bloody hay - but baleage like it's going out of fashion, whatever I can lay my hands on. I'm sort of sourcing it for everybody."

While there is no area of New Zealand currently classed as being in drought, a recent NIWA (National Institute of Water and Atmospheric Research) drought index map confirms that most of the east of both islands is dry or very dry, with extremely dry patches around East Cape, Hurunui, Banks Peninsula and Otago.

NIWA meteorologist Tristan Meyers says much of Canterbury is classed as being a "hot spot" - which is close to going into drought.

"It's defined as when you have a soil moisture deficit of less than 110mm and a soil moisture anomoly [deviation from seasonal average] of less than minus 20mm and so a lot of the Canterbury region I identified as basically becoming a hotspot because it just looks quite dry there."

NIWA's seasonal climate outlook suggests little relief for the eastern South Island for the next few months, although the outlook for the North Island appears slightly better.

The number of sheep fell by 3% in the year ended June 2020, Statistics NZ says.

Support and resources available for farmers impacted by dry

Farmers in regions facing dry or extremely dry conditions are being urged to tap into the resources available to them through their industry good organisations and MPI (Ministry for Primary Industries).

Drought's back with interest

Many parts of the east coast of the North Island - especially from Wairoa down to Central Hawke's Bay - are in a crisis state with a severe autumn drought. Peter Burke drove through the area last week and reports that streams and springs are drying up and sheep in some places are struggling to find anything green.

Lochie MacGillivray says Hawke's Bay needs more rain in the next couple of weeks or there is a risk of the region slipping back into drought conditions.