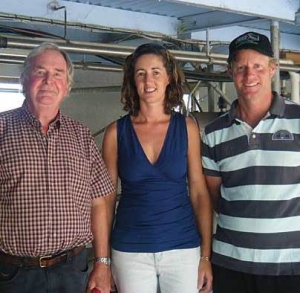 ENTERING THE Waikato Ballance Farm Environment Awards was a great way for Matamata sharemilkers Phil and Kim Dykzeul to find out how their operation stacked up on environmental sustainability.

The Dykzeuls, who 50:50 sharemilk 200 cows on 83ha owned by Richard and Pauline Kean, were thrilled to win three category awards in the 2014 Waikato Ballance Awards, including the LIC Dairy Farm Award.

"We were over the moon to win three awards in our first time in the competition," says Phil.

"Not just for ourselves but also for Richard and Pauline. They've done a lot of environmental work on the farm over the previous 23 years and they've done it all off their own bat because they care very much about sustainability."

As well as getting some acknowledgement for the Keans, Phil says a key reason for entering the competition was "to see how well we were doing compared with other farms".

"We are very proud of the farm and this was a great opportunity for us to share that pride."
Winning the LIC Dairy Farm Award was especially exciting for the Dykzeuls, who are relatively new to sharemilking.

The LIC Dairy Farm award recognises the dairy farmer who demonstrates in a practical way the choices that have been made to farm for the long term. Judges take into account the wise use of land, labour and capital resources, and they also consider the effects of dairy farming on both surface and groundwater and its impact on soil properties.

BFEA judges say the Dykzeuls, who previously had careers in environmental land management and accountancy, showed an "excellent understanding of the routines, actions, reactions and consequences" of dairying.

They also praised the couple's strong working relationship with the Keans. Phil says he and Kim thoroughly enjoyed the judging process.

"The judges were very personable and they had a wealth of experience from both inside and outside farming. They made some very good comments and we asked them a lot of questions, so it was very much a two-way street."

Getting an expert perspective on their farming operation was particularly valuable.

"As farmers we tend to be heads-down, tail-up on our land, and we can become very insular," says Phil. "So it was nice to have the judges come and look at what we were doing and reassure us that we were on the right track."

Phil's advice to anyone considering entering the awards is to give it a go.

"Some people think you have to have a park-like farm to enter, but that is certainly not the case. It's not just about creating indigenous biodiversity, it's about how you manage your soil, pasture and water resources.

"Being involved with the competition is a great learning experience and I think most farmers would benefit from entering. I know we got a lot out of it."
Entries for the 2015 Ballance Farm Environment Awards are now open. Visit www.bfea.org.nz