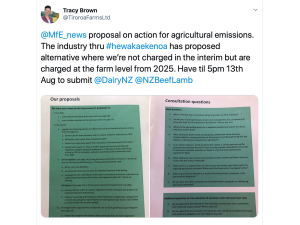 A lively exchange on Twitter last week underscores differing views on tackling climate change. The exchange at times got personal.

It started when Tracy Brown, chair of DairyNZ’s Dairy Environment Leaders Forum, tweeted a Ministry for Environment proposal on climate change -- on farmers not being charged on the interim for emissions but at the farm level from 2025.

“I want the right triggers and policy outcomes that promote a win-win for climate, environment, cows, farmers and Govt. incentivise good outcomes!” he said.

He also questioned whether dairy farmers will pay twice -- for milk and meat.

“We don’t want another 94:6 levy,” he said, referring to the splitting of costs between dairy and beef farmers for eradicating Mycoplasma bovis.

Some dairy farmers remain unhappy with the deal struck by DairyNZ.

“Err Chris, Tracy not selling govt policy. She’s highlighting that there’s an alternative proposal on the table -- one that has Federated Farmers logo on it -- and she’s encouraging farmers to support us taking a lead ourselves rather than sitting back & having it done to us...” Mackle tweeted.

“Perhaps that is not helped by some of the fearmongering at the mo Chris? Isn’t it our job (us & all industry leadership) to provide solutions instead of just pushing back? Don’t we want to remain the best in the world? Ireland on the path to 30% - our 10% seems much more doable?”

This prompted Feds sharemilkers chair Richard McIntyre to invite Winning to sit through a few farmer-banker meetings. “Might change your view on this,” he tweeted.

This tweet got Winning going…. “Are you serious Richard? I’m an ex. Banker. I’m also aware of what’s happening with the credit situation given my economics background. Control the controllables, stopping fighting everything so your org can actually support the important things -- like the credit situation, focus.”

McIntyre said he wasn’t trying to offend Winning. He’s aware of Winning’s background and said she understands what is happening.

“You don’t think I talk with farmers every single day? They pay my wages, I work for them. I attend an event most weeks. I listen and I help when I can. But I don’t believe the earth is flat or wear a tinfoil hat. We evolve and no more so than farmers I work with, you included.”