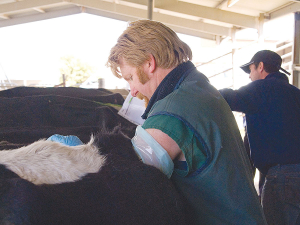 Current border restrictions are making it tough to get more vets into New Zealand with some even choosing to go to Australia instead.

Julie South, talent acquisition consultant with VetStaff, told Rural News that while many overseas vets are keen to work in New Zealand, some don’t mind where they end up.

She says prior to the Government’s announcement that 50 vets would be granted border class exceptions, she’d been working with vets who were considering both Australia and New Zealand as potential places to work in.

“However, because the Australian government made it super-easy for them to work in Australia, that’s where they opted to go,” she says.

“For those who don’t mind – because they’ve never been here, they therefore don’t realise there is a difference between the two countries… but to them it doesn’t matter.

“If your dream is to emigrate down under or do your OE down under, of course you’re going to go to the country that makes it easy and welcomes you the most.”

South says that although these Australia-bound vets are in the minority, the numbers are increasing.

Helen Beattie, chief veterinary officer for the New Zealand Veterinary Association, says that anecdotally, she has heard of similar stories.

“Australia has recently removed some visa requirements, so it is much easier for up to 800 veterinarians to enter the country – this places us in direct market competition for recruitment of overseas veterinarians, and our visa requirements are more difficult to meet, meaning we are at a disadvantage.”

She says that typically approximately 60% of vets are recruited from offshore annually.

Beattie adds that while animal welfare is currently well-protected by the Veterinary Council of New Zealand’s Code of Practice and veterinarians are making enormous efforts to protect the animals under their care, the ongoing welfare of veterinarians has become the real issue.

“Already we know that some veterinarians are seeking exemptions and some relief from the codified requirement to respond, due to the stress of the veterinary shortage and the ongoing impacts on their wellbeing,” Beattie says.

“There are clinics across the country that are no longer taking on new clients, due to lack of veterinary resourcing, and the impacts on their people.”

Calls are being made for the Government to declare veterinarians as critical workers to help solve the current rural vet shortage.