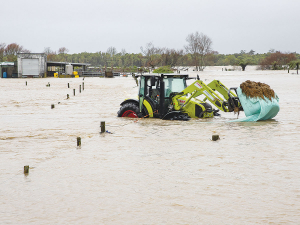 The latest flood is being described as the worst anyone in Westport has seen in their lifetime.

Agriculture Minister Damien O'Connor, who comes from that town, says the flood waters rose to what was beyond historic levels. He told Rural News

that it's still too early to get an accurate assessment of the damage including stock losses.

It's estimated that more than 200 homes in the town may be uninhabitable and more than a dozen dairy farms have been damaged - some severely. But others escaped the effects of the deluge, and the floods are seen as more of an urban than a rural disaster.

O'Connor says one dairy farm in particular was badly hit, with many cows drowned in the raging floodwaters. He says the same farm suffered major pasture damage and its ability to milk in coming weeks might be limited. He expects stock losses to be in the hundreds.

"I have spent the best part of a week in the Buller area and what I saw on the north sie of the river was some pasture damage and fences that needed repairing. But the chances are, farmers will be able to graze their stock on these pastures during spring, provided there is some fine weather," O'Connor told Rural News.

"But there will be some on the south side of the river and in the gorge who may not be able to get production out of that land for five or six months."

The floods have come at a personal cost to O'Connor's brother Bede, who runs the family farm just out of Westport, but that farm has been subject in the past and they have learned to live with this.

"Right now, up to 40 hectares of the farm is covered in silt - in some places half a metre deep. My brother has indicated that he will have to sell cows and make adjustments for next season," O'Connor says. "It's a tough call, but it's one that, if you farm next to major river flats, you have to deal with."

O'Connor says local farmers are helping each other out and there is a great spirit of cooperation within the Buller district. He has praised the efforts of the Rural Advisory Group, which is coordinating the response and recovery operation, and also the Rural Support Trust.

He says the Government will look at providing extra help if it's needed and he's been briefing his colleagues on the situation.

"As usual, farmers will get through calving and help one another and maybe shift stock off the milking platform where they can access fees," he says. "In my view there is inbuilt resilience in West Coast farmers, especially those who have been here for a long time."