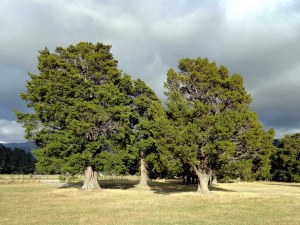 Tōtara: the plant of the year?

Forest owners are urging people to vote for tōtara as plant of the year in a poll being conducted by the New Zealand Plant Conservation Network.

Association president, Peter Weir, says the indigenous tree is probably the best bet for the development of an indigenous planted forestry industry in New Zealand.

“Our industry relies on Radiata pine which grows well everywhere. Tōtara is much the same. It flourishes in a wide range of New Zealand environments and produces an amazing and versatile timber.”

“But for most people it’s a fantastic icon of the pre-settlement podocarp-dominated New Zealand bush and doesn’t need to be harvested to be appreciated.”

Weir suggests that Federated Farmers are also likely to nominate a favourite tree or plant they would want their members to vote for.

“We backed different birds in the Bird of the Year. We wanted the kārearea falcon and the Feds went for the whio duck, but neither of those came in the winner. Maybe one of us will do better this time.”