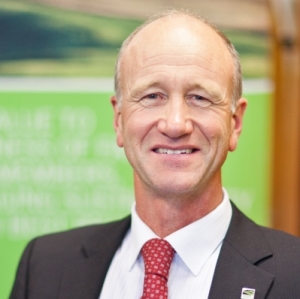 FEDERATED FARMERS president and Hawke's Bay farmer Bruce Wills has been named the 2014 Landcorp Agricultural Communicator of the Year.

In the three years he has led Federated Farmers, Wills has been "an outstanding communicator, successfully representing the interests of farmers with his open, friendly and enthusiastic manner, helped by his willingness to listen to people", says a statement from the New Zealand Guild of Agricultural Journalists and Communicators, which administers the award.

Wills was selected by an independent panel of judges to receive the award, announced at an awards dinner in Hamilton last night.

Guild president Graeme Peters says Wills is a worthy recipient. "He is widely respected for his role in bridging the gap between rural and urban people, and has spent countless hours talking not only farmers but also urban people, selling the importance of agriculture to New Zealand's economy.

"His communication skills at all levels and covering all aspects of rural life are recognised by this award."

Wills says he is humbled by the "great honour". "Given the Landcorp Agricultural Communicator of the Year has such a long history and reads like a Who's-who of the media and agricultural profession, this is an honour I share with my board, provincial presidents and every elected member of the federation.

"I thank the judges and guild for this honour and wish to use my prize money to ensure we can inspire all New Zealanders to join a profession I love," Wills says.

Landcorp provides a prize of $2500, which is part of a funding package of $7500 in sponsorship for the Guild. The additional funding assists with administration costs, including the awards dinner.

Wills was also presented with a greenstone and timber trophy, which features a roll call of previous winners engraved on the back.

Wills farms with his brother at Te Pohue, on a sheep and beef operation carrying 7500 stock units. The farm is 1134ha, of which 800ha are farmed and the balance is in trees and 110ha which are protected through the QEII National Trust. He left a career in rural banking after 20 years to return to the family farm and has invested heavily in the long-term sustainability of the farm

Wills was also a finalist in the 2013 PRINZ Communicator of the Year awards.