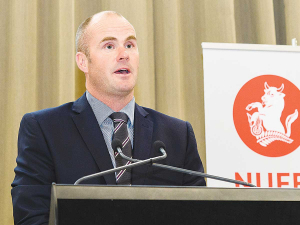 Ben Mclauchlan, from Marlborough, is one of five recently announced NZ scholars who will spend the next 12 months in international research. He hopes this will provide him information to deliver back to the wine industry here at home.

The owner of a 102ha vineyard and 30ha beef finishing unit, Mclauchlan has degrees in commerce, viticulture and oenology and was a commercial partner for BNZ in Marlborough.

He applied for a Nuffield Scholarship as a means of studying overseas.

“The chance to study with an overseas focus programme really appealed. Especially in primary industries, which is exactly what I am doing in my day job,” he told Hort News.

Originally, Mclauchlan wanted to concentrate his study outside viticulture, looking at precision agriculture and its place in other primary industries, and technology that could perhaps be transferred to viticulture, notably because of the need to reduce the use of fossil fuels and reliance on labour.

“Both are scarce resources and only going to become even more scarce and more expensive moving forwards.”

However, Mclauchlan says the further he’s got into the scholarship, the more he has has realised that the original goal was huge.

“The more I think about it, I have wondered if that is too big to bite off.”

So now he is leaving his options open, having realised that defining his long-term goal too early may stymie any chance of gaining broader knowledge.

The Nuffield Scholarship comprises a conference for all scholars internationally, followed by a six-week tour of countries with a smaller group of eight or nine. For this six-week tour, Mclauchlan has elected a tour of Singapore, Philippines, Japan, Israel, Netherlands, Washington DC and California.

He hopes the weeks in different countries will highlight the problem he wants to focus on for his final component during another eight to 10 weeks of individual travel and study.

At the end of the 12 months he expects to share what he has learned and engage with key stakeholders. These will be New Zealand Winegrowers, Wine Marlborough and the Bragato Research Institute.

“For me it’s delivering back to those big organisations, but it is also about the practical implications of my study,” he told Hort News. “The theoretical is great, but how can I help change day-to-day practices and the implementations.”

Which summarises one of the Nuffield Scholarship goals: ‘Awarding life changing scholarships that unlock individual potential and broaden horizons through study and travel overseas, with a view to developing farming and agricultural industries’.

New Zealand has five Nuffield Scholars for 2020. Besides Ben Mclauchlan they are Tracy Brown, a dairy farmer from Northland; Shannon Harnett, a chartered accountant with experience in dairy, sheep and beef farming and horticulture; Edward Pinckney, a dryland farmer near Ohai in Southland; and Phil Weir, owner of a drystock property near Hamilton.

The Nuffield Scholarship was established just after WWII by philanthropist Lord Nuffield, initially for British and Empire farmers. The idea was to recognise farming’s contribution to feeding a nation during the war and as a method of advancing best practice in agriculture around the world.

Since the first two scholars were announced in 1947, at least 1000 have taken part annually.

The Government has announced a new scholarship aimed at boosting global scientific expertise in agricultural emissions.

The man behind New Zealand’s newest agricultural training venture is a local farmer and entrepreneur – with a proven track record in the sector.