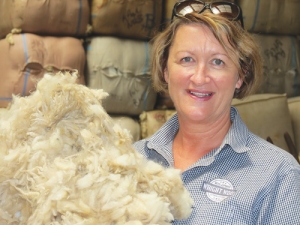 It also needs to explain to the public the reasons for some farming practices, which people perceive are not in the best interests of sheep.

She says delegates were concerned about the worldwide decline in sheep numbers, but were also optimistic about the future of wool and consumers' recognition of its attributes.

"The feeling was that wool is almost on the cusp of a breakthrough with consumers," she told Rural News.

"It's ticking all the boxes of what the consumer is calling for, such as being environmentally sustainable. Consumers are becoming educated and much more picky about what they choose to wear. They want to know where everything comes from and more information about the whole process of wool from farm to retail outlet," she says.

But Wright believes there are big issues for the industry to address, for example, farming practices such as muelsing, which is seen as cruel. She says even shearing is seen as a problem.

"A lot of people still think that if you shear a sheep it dies. We need to tell consumers that the sheep grows wool to keep warm in winter and protect it from bugs and disease," she explains. "The reason the sheep grows wool is to protect it, that if you don't shear the sheep it will become overloaded with wool, which is heavy and hot, and that it has a much greater risk of suffering from flystrike which is terrible.

"The same applies to muelsing. Animal health is a huge issue, but we have to be more honest and get the message out properly rather than have people attack us and create stories that are untrue."

Wright says New Zealand and the other major farming countries have nothing to be embarrassed about because everything they do is for a reason and 90% of farmers treat their stock well. She says we all know that if you have a healthy sheep you make more money.

The international campaign for wool which Wright has been involved in has gained a lot of traction in the UK and Europe. Research is showing that companies want to align themselves with the wool brand and that wool has become a positive talking point. But experts are saying the message needs to get out to a wider audience.

"One marketing guru said he'd been at the congress for three days and that it was all great, but we were talking to each other and telling each other how great wool is. We need to tell the same story to the consumer and make them realise the value of wool and its benefits to them," this man said.

Wright says there is a great story to tell about wool, whereas its competitors have to make up a story or use science to create the same thing.