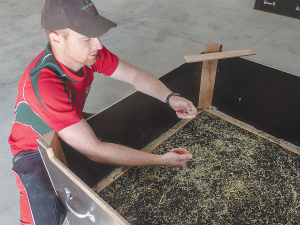 Matthew Falloon inspects a harvest of asparagus seed. The seed, still mixed with some plant debris at this stage, is being dried in a bin with warm air percolating up from a grille in the bottom of the bin. Photo: Rural News Group.

Dr Peter Falloon, a former DSIR plant scientist, said New Zealand used to export 1600 tonnes of the delicacy, but has lately “gone off the radar”.

“I think we’d have been lucky last year to have exported 100 tonnes,” he told Hort News.

The reason, he says, is that Mexico has a free trade agreement with Japan, while Japan and Korea impose tariffs of 28 or 30% on our asparagus.

Falloon expects the trade to pick up as those tariffs fall under the CPTPP. He points out that Mexican asparagus grows fast in the heat, using up its sugars, while NZ asparagus grows more slowly in the cooler climate and ends up tasting better.

Falloon no longer produces large quantities of asparagus spears himself. However, he has carved out a niche as the only asparagus breeder in the southern hemisphere – and one of only six in the world – producing seed and crowns for both the domestic and export markets.

A recognised expert on the fungal disease phytophthora, he offers the only phytophthora-resistant asparagus strains.

Falloon earned his PhD studying asparagus diseases in California when working for the Crop Research division of the DSIR. He struck out on his own in 1999, after Crop Research became a “corporate giant”. Plant and Food “and the days of sitting down with your director and talking science vanished.”

He set up his company Aspara Pacific on a 3ha property, near Templeton, near Christchurch. Originally part of a mushroom farm and also previously used for propagating calla lilies, it came with its own tissue culture lab.

He also bought a farm at Greenpark, near Lake Ellesmere, where saline soils are ideal for asparagus. There he ran the main asparagus packhouse in the South Island, growing about 20ha of asparagus and packing for seven or eight other growers. It served domestic and export markets, some going as far as England, but most to Japan or Australia.

However, Falloon says the farm was primarily to fund his continued research. Five years ago, he sold the main block to LeaderBrand. The property is still producing well, on plants which Falloon established 19 years ago.

The sale freed him up to do a lot more asparagus breeding and consultancy in NZ and overseas, including working for NZ companies setting up asparagus farms in Mexico and Peru.

Falloon remains a consultant with LeaderBrand, now the biggest grower in the South Island with about 40ha. He also supplies the country’s biggest grower, Horowhenua’s Geoff Lewis, with about 120ha.

In season, they also still sell a few spears at the farm gate and farmers’ markets in Christchurch.

His wife Linda manages the tissue culture lab – now working on potatoes and asparagus – while their son Matthew runs the farm with the help of five permanent employees and up to seven or eight casuals at the height of the season.

The plants are pollinated by hand. Each autumn mature female ferns are cut by hand and fed into a header to harvest their red berries, each one of which contains five or six black seeds.

Seeds are either sold direct to growers or planted to produce young crowns, which are lifted and graded at about a year old.

Most go to domestic commercial growers, and some to retail garden centres via a licensed distributor. Seed is sold to growers in Mexico, England, Germany, Japan, China, Australia, Peru and elsewhere.

Falloon says asparagus is a valuable crop, emerging in spring when not much else is producing. It is relatively risk-free from frost damage, since new spears will emerge to replace any damaged by a late frost.

It requires very little fertiliser, about 100kg/ha of N applied after the spears are picked, so it is taken up by the growing ferns through summer. The ferns are then chopped up to return nutrients to the soil before the next season.

Asparagus is very labour-intensive, but robotic harvesting is coming within the next 10 years, Falloon believes.

The key now is the imaging so the machinery can recognise when product is market quality or a reject.

“We’re inching closer to robotics in asparagus. There’s a German machine that picks white asparagus robotically. They’re not as quick as humans, but the beauty of it is they run 24/7 and so you catch up.”

There are also good sorting machines being developed.

“In horticulture now is there is a huge expansion in kiwifruit and apples and blueberries, but the real limitation is labour,” Falloon said.

“Why would you grow a premium crop if it’s not going to get picked?”