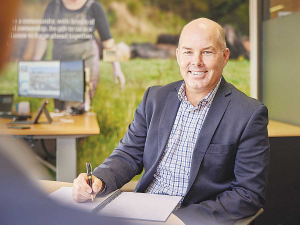 It was only a few months ago he was head of the highly successful Maori-owned dairy company Miraka - a company he helped set up from scratch.

However, Wyeth says he's rreally enjoying the new job at Westland and what's really impressed him is the people in the business.

"There is a really strong desire to see the business do well and people are working really hard to do this," he told Rural News.

For Wyeth, the move to Westland has some new challenges and differences from his early days at Miraka.

"when I started there, I was the only employee, but this time round there are 700 staff," he explains. "It is certainly different coming into an established business. It is quite a unique business in the sense that it has been around for a long time and is now under Yili's ownership."

Wyeth says part of his role is helping to make sure that solid foundation at Westland works with the Chinese ownership, and leverage off the strength of the parent company. He says one of differences from Miraka is that he reports to a head office in Chaina to a company that is the fifth largest dairy company in the world.

He says Westland is a small subsidiary of that large business, which is quite different from Miraka that was a small company in its own right.

However, during his time at Miraka, Wyeth was a frequent visitor to China and has a good understanding of the culture of Chinese business systems.

"What I quite like is that I can bring my experience in working with the Chinese and help the West Coast to understand those cultural differences because, ultimately, we want the same thing and that is for Westland Milk to be successful - which means that the West Coast will be successful," he told Rural News.

"If I can do a good job with Westland, then Hokitika - and the whole West Coast - will do well and it will help Yili achieve its goal if being the third biggest dairy company in the world by 2025."

Wyeth is working out of Westland's Canterbury office and has made trips to Hokitika to meet with his leadership team and staff. Not surprisingly, he's been pre-occupied with focusing on the main business and hasn't had the opportunity to get out and meet some of the 429 farmers who supply the company.

"Absolutely I am looking forward to getting out on farm and meeting all the farmer's and am planning to do that in the coming weeks," he says.

It's early days yet and Wyeth is in the phase of looking at the business and making sure that it is profitable. First impressions are, he says, that the plant and equipment is tidy and everything is where it needs to be.

He says the organisation is well positioned to achieve what is required in the coming years.

"We have guaranteed to pay a competitive milk price and to do that we need to be making high value products and selling them across the globe," he adds.

Chinese-owned Westland Dairy Company is getting $1.7 million from the Government to accelerate plans to reduce carbon emissions produced by its Hokitika factory.