Wanaka A&P up for award 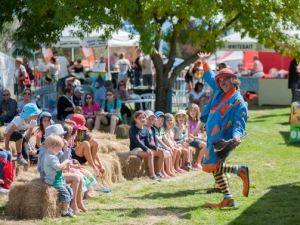 A clown entertains the crowd at the Wanaka A&P show.

The Wanaka A&P Show has been nominated as a finalist in the annual New Zealand Association of Event Professionals Event Awards.

The popular show, which attracts 35,000 people over two days every March, has been nominated in the Best Established Community Event category.

Entries for this category must demonstrate an event's content innovation, how it achieved target audience and community outcomes, how the community was engaged in the event, media support and the use of good management practices.

"It is run by locals for locals – and each year we give generous donations to worthy organisations in recognition for the community's support of the Show. Last year we gave away $80,000 to community groups following the 2014 Show," she says.

"We meet the community's needs by providing an event of major economic significance for Wanaka, showcasing the very best of rural life and agricultural excellence, providing quality grounds for our competitors and seeking out the very best entertainment to appeal to our target audiences."

The not-for-profit Upper Clutha A&P Society owns the Wanaka A&P Show. Society president Robbie Gibson says the nomination is testament to the hard work of the organisers, the volunteers involved and the support of the local community.

"Each year we strive to put on the best event possible, and we are honoured to be nominated as finalists," says Gibson.

"The Wanaka A&P Show is an iconic community event for Wanaka and the Southern Lakes that has grown into an event of national significance."

The 2015 show brought almost $10.9 million worth of direct economic benefits to the area this year, according to a recent independent study.

The NZAEP Event Awards take place in Wellington on July 22.