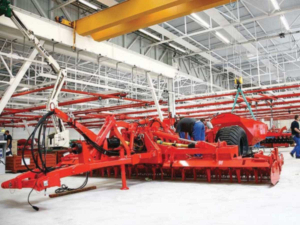 The world's major agricultural tractor and machinery manufacturers seem to be faring well despite the economic fallout of the global pandemic.

A look at how four of the major agricultural tractor and machinery manufacturers are faring, with third quarter results posted for 2020, it appears that farmers haven’t locked away their cheque books or cut up their credit cards.

For the full year, AGCO is predicting “flat demand” with likely total revenue touching US$9 billion.

CNH Industrial, best known for its New Holland and Case IH brands, is reporting revenues of US$7.49 billion for its agricultural equipment division, with net income of around US$498 million – a fall of 25.7%.

Overall, the CNH Industrial conglomerate – which includes agriculture, construction, commercial vehicles and powertrains – has been hit badly with a total net income of US$625 million, a 147% drop on the US$1.33 billion surplus posted in 2019.

Global giant Deere and Company saw its annual sales for its Ag and Turf Division hit US$23.35 billion – a fall of 5.7%. However, its operating profit was in the black, climbing 18.5% to US$2.97 billion.

The company is predicting its sales within the agricultural sector will rise during the 2021 fiscal year by between 10 and 15%, driven by upturns in the North American and Canadian markets, with farmers and contractors moving to larger, higher capacity units.

For the nine months to 30 September 2020, the Kubota Corporation saw revenue drop by 7.1% overall and domestically by 9.4%. The company’s Farm and Industrial Machinery Division’s income fell by around 21%, to Yen 96.5 billion.

In a world where agricultural machinery sales are driven by long-liners like AGCO, CNH Industrial, Claas and John Deere, several “short-line” European companies are also doing rather well on the global stage, based on 2019 turnover figures.

However, this might change because of the 2020 pandemic, but until March of last year, most were reporting strong sales in domestic markets, eastern and central European states, and an increasing interest in European equipment from farmers in the Americas.

Interestingly, dairy equipment companies have consolidated their presence in the upper realms of the top ten by 2019 turnover, while producers of equipment for arable or forage production, continue to grow in scale – often by acquisition.

Just missing out on the list are names like Lemken at €380m, Vaderstad showing sales of €321m and Italian cultivation specialists Maschio Group topping out at €316m.

One name missing from the list is Kverneland, which was bought by Kubota in 2012 and no longer publishes its standalone figure. Rural News understands that the company’s turnover is estimated to be around €500m.

Pick one from this rugged trio

On-farm transport was revolutionised with the arrival of quads, but really came of age with side-by-sides.

Giltrap Engineering's new WideTrac is said to be a cost-effective, easy-to-use fertiliser spreader that eliminates the need for manual adjustment.

Call them what you will, but UTVs, or side-by-sides, have certainly found a place in much of New Zealand’s rural sector.