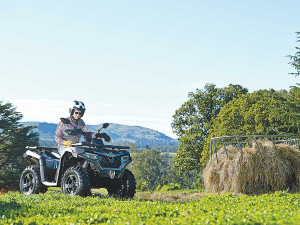 The new ATV features a shorter-wheelbase, longer-travel suspension, a 500kg tow capacity and a class-leading turning circle for optimum manoeuvrability around the farm.

Power Is provided by a 580cc four-stroke, liquid cooled, Bosch EFI single-cylinder petrol engine. This delivers 41hp and 49Nm, which in turn is mated to an improved CVT transmission from CV Tech of Canada, where power has been tuned for a linear delivery and maximum versatility in all terrain and conditions.

For difficult or rugged terrain, switchable 2WD/4WD modes combine with front and rear differential locks are on hand and easily engaged by the touch of a button.

Meanwhile, the choice of high or low ranges also helps to direct power to the task at hand.

Bringing things to a safe controlled stop, falls to hydraulic disc brakes at all four wheels mated with a combined braking system, enhanced by the engine brake system.

Other standard equipment highlights include a 3000lb winch, handguards, indicators, horn and mirrors – as well as the convenience of Electronic Power Steering (EPS).

Towing is upgraded to 500kg from the previous 350kg limit, while front and rear cargo racks are rated at 35kg and 70kg respectively.

Priced from $9990 (plus GST) and backed by a two-year warranty, CFMOTO New Zealand director Michael Poynton says the new CFORCE 625 EPS is sure to be well-received among Kiwi farmers.

“It’s loaded with work-ready features and, like all CFMOTO ATVs, it offers farmers unbeatable value for money,” he says. “It’s incredibly well-constructed and ready for the relentless demands of New Zealand’s dairy farms, which are renowned for being the most brutal on farm equipment in the world – quite the title.”

Confirming a move signalled over a year ago, in response to a directive by the Australian federal government that all quad bikes must be fitted with operator protection devices, Honda will stop selling quad bikes in Australia on October 10.