Battery-powered tractors still a way off 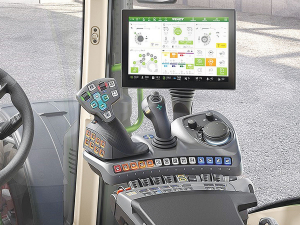 A look inside the cab of a new Fendt 700 Series.

The likelihood of electric or hybrid powered farm tractors still appears a long way off.

Fendt director of research, development and purchasing, Heribert Reiter, says tractors up to 68hp (50kW) can typically use batteries to run for one to four hours depending on the task.

Calculations show that a 250hp (180kW) tractor running for 10-12 hours a day at about 50% capacity would need a massive battery.

Fendt also reports its new 700 series -- its most popular range -- will probably appear at Agritechnica in November.

It will include a new multi-function joystick with added functions such as a revamped cross-gate lever with forward/reverse shuttle control, and extensive colour coding to ease operator use.

The tractors will also have three display options with a central computer. A 9-inch steering column mounted, tablet style display will offer machine features and road travel information. A 12-inch terminal is mounted to the right-hand armrest, while an optional 12-inch display is located just below the roof lining on the right-hand side of the cabin.

The tractors will eventually have the FendtOne system that will connect on-board information with, say, farm offices or mobile devices, all with consistent appearance and layout.

High rise cargo in the wings?

While telescopic handlers are increasingly popular on New Zealand farms, the arrival of German tractor maker Fendt in the sector takes things to a higher level – literally in the case of the operator.

Baseball caps, overalls and jackets are a familiar aspect of aftermarket promotion. But Fendt has taken an interesting step further.

German manufacturer Fendt has released details of its new sixth generation 900 series tractors, which will be a big focus at Agritechnica later in the year.