From garage to exports in 25 years 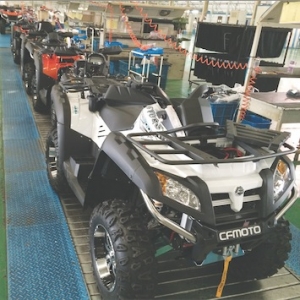 Cue CF Moto’s invitation to Rural News to go on a dealer trip to its factory in Hangzhou, 170km southwest of Shanghai, China. “Don’t listen to us, come and see for yourself,” the company said. So we did.

At the 150,000m2 facility, complete with dormitories for workers and their families, we get the company history from Charles Ni, chief sales officer. CF Moto was started by Lai Guogui in 1989, making engine parts in a garage; in 1996 the company started making engines, then motorcycles in 2000 and quads in 2004. It has carved out a unique position in China in that it makes larger capacity motorcycles, not scooters, and focuses on export markets rather than the domestic market, which apparently buys 14 million motorcycles each year.

The company has come a long way since that garage and its most recent achievement is a partnership with Austrian motorcycle company KTM to manufacture the Duke 390 for the Chinese market – a huge tick of approval.

CF Moto is becoming more visible on the world stage through participation in motorsports events, and the development of a 650cc engine has given the company a credible presence in the world road-bike market with the 650NK naked roadster and the full-fairing tourer, the 650TK.

Its growth has been rapid and exports hit 30,000 units in 2012 then 40,000 this year. It has 1500 dealers worldwide and big market share in Russia, Sweden and Germany. Of interest to us, many of those units are quadss and in Australia they are now ranked fifth in ATV sales.

The focus on export rather than domestic markets seems to be a key to their success.

Exports are critical to CF Moto, in part because of the size of recreational markets in developed countries, and because there are restraints on their domestic growth: the scooter market is huge but the larger-capacity motorbike market is relatively small and two wheel vehicles are banned from freeways. Also, Charles Ni tells us owning a quad or side-by-side is illegal in China.

With global expansion firmly in its sights, he says quality is a major focus for CF Moto with technical feedback from export markets fed quickly back into product development. “Engine development is continuous. R&D investment equals 9% of our sales revenue, high by most standards but important for a fast growing company like ours.”

Mojo Motorcycles Australia imports CF Moto motorcycles for the Australian and now the New Zealand market. Michael Poynton, one of two founding directors of Mojo, has worked with a number of Chinese companies since setting up in 2003 and says the culture of CF Moto sets them apart. This includes their focus on overseas markets, their professionalism, strong communication and long-term approach.

“They understand the importance of consistently building equity in their own brand in export markets, which many Chinese companies don’t get.”

Mojo is the fastest growing motorcycle company in Australia, selling some 5000 units per year through a network of 80 dealers. CF Moto is its biggest brand, selling 2500 units in 2014, mostly four-wheeled. CF Moto is now the fifth best-selling quad brand in Australia with 10% market share and Poynter expects to achieve 15% market share in quad/side-by-side sales – about 2000 units – in 2015.

They are eagerly awaiting a 400cc quad in 2015 to give them an offering in the segment that many farmers shop in – the sub-450cc segment. The new 550 side-by-side will also be important for Australia and New Zealand where there is a growing trend toward side-by-side sales.

Poynter understands that the quad/side-by-side market downunder is all about agriculture and has impressed this on CF Moto who initially focused on large capacity, long-wheel base quads for the huge Russian recreational market.

Charles Ni says they have learned plenty from Mojo, through regular technical reports from Mojo and bi-annual meetings with engineers, about the specific demands placed on their machines by farmers. And about the models and specifications that will best suit our markets. “We don’t do much testing specifically in farm conditions but extensive testing is done in a range of harsh conditions unique to all our markets and all engines are bench-tested for 400 hours.”

The emphasis on dealers is not accidental. Poynter acknowledges dealers are critical to building confidence in the CF Moto brand at a grassroots level. Notably, 50 of his Australian dealers are multi-franchise and the fact that they sell other well-known brands alongside CF Moto has been a big factor in the rapid growth.

Taking dealers and media to the factory is also a key, allowing those in the industry to see for themselves that the factory is operating to a high level of quality control and workmanship and that the bikes are built up to a level of quality, not down to a price. Seeing KTMs rolling off the same line underscores this confidence in the product, which dealers can then take back to the bike shop and field days.

“The product is well suited to Australia and New Zealand, and the manufacturer offers strong support and good systems to dealers,” says Poynter. “Our dealers also believe they are part of something special in building this brand. Remember the days of ‘Jap Crap’? History is repeating itself in China.”