High rise cargo in the wings? 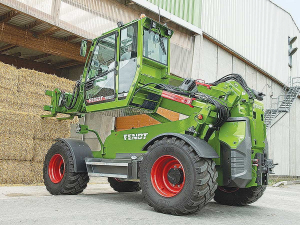 While telescopic handlers are increasingly popular on New Zealand farms, the arrival of German tractor maker Fendt in the sector takes things to a higher level – literally in the case of the operator.

Fendt had desired to be a ‘long-liner’, and the cargo designation had already been ‘pinned’ to the company’s frontloaders. Now a T-designation marks the arrival of its first telehandler.

Built in a co-operation with the German builder Sennebogen Machinefabrik – known for its port cranes and HD telescopic handlers – Fendt’s Cargo T955 has a maximum load capacity of 5.5 tonnes with a lift height of up to 8.5m.

Its standout feature is a unique lifting cabin that also has vibration damping.

It has the key advantages of a conventional telehandler – reach, overall lift height, low body height and high manoeuvrability.

And its cabin can rise in tandem with the telescopic arm to a maximum height of 4.25m, giving an exceptional view of the job at hand. It has no dashboard to obstruct the lower part of the front screen, so there’s floor to ceiling visibility -- particularly useful when placing loads at high levels or filling high-sided trailers or truck bodies.

Fendt says that even raising the cabin by 20 to 30 cms from its normal ‘parked’ position gives visibility only normally achieved by heavy duty, wheeled loading shovels.

Rural News has yet to learn on whether the Cargo T955 will be available on the New Zealand market.

Battery-powered tractors still a way off

The likelihood of electric or hybrid powered farm tractors still appears a long way off.

Baseball caps, overalls and jackets are a familiar aspect of aftermarket promotion. But Fendt has taken an interesting step further.

German manufacturer Fendt has released details of its new sixth generation 900 series tractors, which will be a big focus at Agritechnica later in the year.