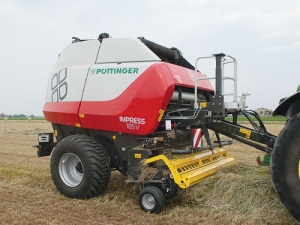 The Impress range will be offered with fixed or variable chambers with a combined wrapper and with a choice of master or pro specification.

Grassland and cultivation specialist Pottinger claims a first for its new range of round balers, achieving chop quality usually associated with loader wagons.

The Impress range will be offered with fixed or variable chambers with a combined wrapper and with a choice of master or pro specification.

The feed route to the bale chamber has been redesigned: the maker's Liftup carries the crop over the feed rotor rather than the traditional route that takes crop under. The Liftup rotor carries a series of tines arranged in a patented spiral layout, which push the crop into the chamber at an angle.

This offers the benefit of high feed rates with low 'leaf shatter' and creates a filling effect across the full width of the chamber. It also removes the need to steer left and right to create good shaped bales.

The company says the units work equally well in wet or dry conditions and suit all types of crop.

Chopper versions have the Flex Cut system of 32 twin-blade reversible knives which offer a theoretical chop length of 36mm across the full bale width.

The Impress chopper balers have a swing-out knife system with easily moved knife banks, providing good maintenance access at workbench height outside the bale chamber – important given the large number of knives in the machine.

Expect to see evaluation machines in 2016 and machines on sale for the 2017 season.

Well known throughout New Zealand over the past 18 years, Pottinger has redesigned its rear-mounted Novadisc mowers to incorporate a side pivot mounting.