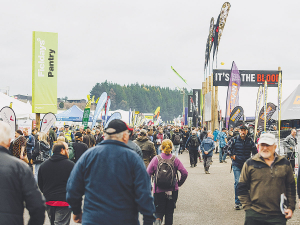 Will the crowds and exhibitors turn up to the newly announced late November/early December dates for the 2022 National Fieldays?

Fieldays chief executive Peter Nation claims the revised timing will allow the event to operate to its full potential, "giving all attendees, exhibitors and stakeholders some breathing room and confidence during these uncertain times".

Nation says that feedback from customers is that they really want the event to run but he points out that there were several factors that might have stopped the event going ahead in June as scheduled.

These include the current Omicron situation, putting resources under pressure, particularly with stand-down periods in an already tight labour market and some exhibitors struggling to get stock because of global shipping and local logistics problems.

"While we could assume, or hope, that an orange traffic light setting would be in place by the time the event arrived in June," Nation told Rural News, "the fact is that the Fieldays build starts in April, so that would just not be possible under the current red light strategy."

Fieldays says that it considered a range of rural sector seasonal timings before coming to its decision. However, the immediate response from some in the sector suggests that they may have missed the mark.

November is considered a busy time of the year for dairy farmers, with mating, twice daily milking and grass harvesting all in full swing. Some were saying Fieldays would be a "no-go" this year, while others said it would have to be a very early start to the day or hiring replacement staff to take a day off.

Talking to potential exhibitors, some suggested that the new timing might be a case of tyre kickers and children aplenty, but those looking to do business in short supply. One large importer/distributor told Rural News, "The timing is terrible as we are right in the thick of silage harvesting. It is a complete disconnect to the farming industry on the part of the Fieldays' board with absolutely no consultation. We will most likey not attend."

Conor Leahy, marketing manager for the Landpower Group, said they had not had any consultation, just an advisory e-mail on February 11.

"For us, the new timing raises several questions, such as, will customers attend at such a busy time of the year and, as its the start of the summer season, will there be easy access to tents and marquees?" he told Rural News.

"Then there is the issue of the 2023 event, as it makes absolutely no sense to have the same event within six months of each other, while also having to fit the regional field days in between. We will have to have a lot of internal discussion before we can commit to the new timing."

John Tulloch of Tulloch Farm Machines said they were not consulted about Fieldays being in November/December. "It doesn't work for us, and I can't imagine it working for anyone else either."

Meanwhile Peter Scott, Fendt national manager for AGCO noted it was not a great time. "But, I guess, the success or failure of the timing change will need to be gauged by the number of customers that come onto our site. We will just have to make the most of it."

The 2021 event was deemed a huge success - following the cancellation of Fieldays 2020 and a switch to an online-only format that year - with around 132,000 people through the gate.

The question is, if the 2020 Online Fieldays format was so good, as the Fieldays PR machine suggests, why they don't take this route in 2022, before a return to 'normality' in 2023?

Nation says he isn't expecting this year's event to be any different to the last and reckons it might be even bigger.

Only time will tell, but with the bordes opening to tourists, Omicron passing its peak in Auckland already and the likelihood of vaccine passports disappearing in the very near future, has Fieldays shut the gate on the June event a little too soon?

By delaying to November, it might give exhibitors a chance to take a close look at whether attending the event is really good use of their marketing budget.