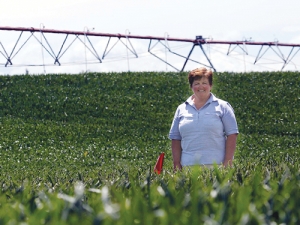 The so-called mother of precision agriculture in New Zealand, Methven's Ros McKenzie, was instrumental in getting Spark to install 4G wireless broadband in rural Canterbury.

McKenzie and her husband Craige have championed data driven precision agriculture for years. Their technical approach led them to be recognised as Ballance Farm Environment Award winners in 2013 for their innovation and leadership in the arable industry.

They spoke at the Canterbury Mayoral Forum about what impacts 4G would have on farming if it went ahead. Dame Margaret Bazley, Environment Canterbury chair, singled out their presentation as a defining moment in the digital connectivity taskforce's work.

"If it's measurable, you can manage it," she says. "Variable rate irrigation, distance learning, conference calls, contact with online workshops, sending jobs to spray tractors with GIS mapping of the task."

McKenzie says farmers used to look at a paddock and knew there were areas that didn't produce as well as other parts. Now it is possible to analyse them using sensors and use technology to target those specific areas to increase growth.

"Data is a powerful thing; as farmers build up the data from their farm this knowledge will now become a valuable asset," she explains. "For instance, when the time comes to sell, the data package from your farm will be valuable to the incoming farmer. Or being able sell the data to suppliers or manufacturers of farming equipment so they get empirical feedback of actual use."

Access to technology will attract people back to the rural sector as it will no longer be seen as only hard manual work – there is a lot more to farming now. Cross-pollination from across technology areas with app builders, etc, means no one needs to limit their thinking to just the agricultural sector, McKenzie adds.

They have done around 15,000ha of electromagnetic mapping of soils during the last three years in the South Island. Now they are poised to take advantage of the change 4G will offer.