Age not wearing this farmer 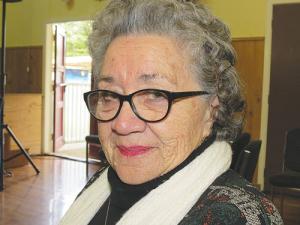 Moyra Bramley is proud of the efforts of the Onuku Maori Lands Trust, which she chairs, has achieved in farming.

Moyra Bramley was born in 1933, the year Sir Apirana Ngata and Lord Bledisloe inaugurated the Ahuwhenua Trophy to recognise excellence in Maori farming — now Ms Bramley has at least a 50/50 chance of winning that trophy.

Bramley is in the running for her role as chairwoman of the Onuku Maori Lands Trust, one of two finalists in the competition.

Onuku's entry in the competition is its 72ha Boundary Road dairy unit is near Lake Rotomahana, 30km south of Rotorua. It is one of four farms run by the trust.

The 220 cows on Boundary Road produce 90,000kgMS. All the farms sit under the shadow of Mt Tarawera, which erupted violently on June 10 1886, killing many people and destroying a world-famous tourist – the Pink and White Terraces.

The mud and ash that spewed from Mt Tarawera is today commonly referred to as ‘mash’; it is very fertile and grows good grass all year. The landscape is picturesque with many trees sheltering animals.

The success of Onuku as a farming enterprise, including the Boundary Road farm, is due in no small part to Moyra Bramley who now chairs the trust. She has been a member of the trust since its inception in 1982 and has overseen many changes; in recent years she has seen farming move to a more corporate model having to deal with market volatility. But through all this the trust has prospered.

“We have been diligent on how we manage things. We do our due diligence on all aspects of what we are doing; we make sure we have the money and we make sure that anything we invest in has a return that is worthwhile.

“If the numbers don’t stack up we don’t invest,” she says.

Bramley says the trustees are very careful about how they manage their business and always must look at the future. She says their land is not for sale; so, it must be producing forever so that it can be handed down to the next generation.

“For me, being in this trust for 30 years, I have fulfilled my obligation to the owners. I have turned it from a trust that was worth $2 million in 1982 to now when it is worth over $30m. So I think I have achieved that. If Onuku does win the Ahuwhenua Trophy it will be a culmination of all my time on this trust and I will die happy.”

Bramley says she doesn’t think of the Ahuwhenua Trophy as a competition, rather as an acknowledgement of what they have done. She says whether you win or not it doesn’t matter, because the whole process of the competition gives you the incentive to excel.

The finalists in the 2022 Ahuwhenua Trophy competition for the top Māori sheep and beef farm have been announced.

Another primary sector event has fallen victim to the current risk of the Covid-19 Omicron variant.