Awards a way of showing townies and media the truth 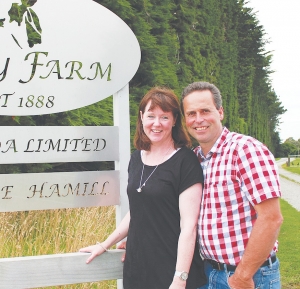 SICK AND tired of bad press about farming? Then why not enter the Ballance Farm Environment Awards?

That’s what Southland farmers Mark and Deborah Hamill did about this time last year.

“One of the key reasons we entered was because we were sick of all the negative stories about dairying in the media,” says Mark.

“The people generating these stories were basing them on emotion and not facts, and that really got up my nose…

“I know my neighbours feel the same way. If you don’t care about the environment and your stock, you don’t have a farm.”

They converted their 301ha sheep and beef farm, near Gorge Road, to dairying in 2008 and now milk about 800 cows on a 241ha milking platform.

They’d been approached about entering the BFEAs before but 2014 was their first go. “We didn’t feel we were doing anything special.”

Yet they landed three category awards, including the PGG Wrightson Land and Life Award which was notable, says Deborah.

“It recognises all the people who have been involved with our farm and all the relationships we have built up over the years. These things are an important part of our journey.”

She says the competition “makes you look back at where you have come from and where you are now, and then it makes you think about where you will be in five years.”

They included their three children in the BFEA judging process. Both sons are studying agriculture at university.

“We feel it’s vital to invest in our children and involve them in the business. They are our succession plan.”

She also says she’s “very proud” of what Mark’s achieved on the farm, which was another reason for finally entering the awards.

They’ve fenced and protected about 30ha of native bush, wetland and riparian areas. BFEA judges described their south coast property, ‘Folly Farm’, as “beautifully presented” and noted their passion for the ecosystems in the river, creeks, bush and wetlands on the property.

Mark says the awards are unique because they don’t focus solely on production and profitability.

“They look at the social and environmental factors that are a crucial part of the whole farming picture. That sets it apart from other competitions.

“As farmers, I think we have a responsibility to showcase what we are doing. People in town need to hear about the good things happening on the farm.”