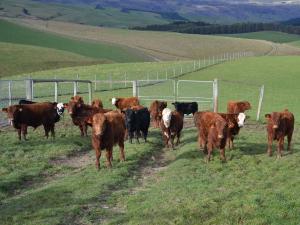 The Informing New Zealand Beef Programme is on the lookout for a North Island farm to expand the project.

With the first calves born into the Informing New Zealand Beef Programmes now on the ground on Pamu's Kepler Farm near Te Anau, attention has turned to finding a North Island farm to expand the project.

The seven-year programme is designed to generate more income for beef producers with an across-breed evaluation of bulls. The aim is to produce more efficient beef animals that generate less greenhouse gas and are more profitable.

B+LNZ Genetics specialist Jason Archer says the purpose of the progeny test is to gather the information to rank bulls across breed; mainly Angus and Hereford - but also Simmental, the third largest beef breed in New Zealand.

"Right now we can rank Angus bulls against Angus bulls and Herefords against Herefords because those herds are all interconnected and use common bulls. But we don't have a great handle on being able to rank a Hereford bull against a Simmental bull, for example," Archer explains.

"It's not picking winners because some cattle will be outstanding for some traits and other cattle will trump them in other aspects of beef production. There is no such thing as the perfect bull - although there are very good bulls."

The programme is funded 60% by B+LNZ and 40% by the Ministry for Primary Industries Sustainable Food and Fibre Futures fund. Work has started with a progeny test at Pamu's Kepler Farm and now a North Island beef operation is also being sought for the seven-year long programme.

"The right place from our point of view would ideally have 400 to 600 mixed age cows that we can mate with an AI programme and those cows ideally would be a reasonably even line of cattle," Archer says.

"It's important the cows are reasonably even so when we put the bulls over them, we're getting a fair evaluation without big breed differences coming in from the cow side."

However, he says the most important thing is the people involved and the stability of the business.

"We're looking for probably a 6-7 year commitment and we want someone who has a passion for cattle and is interested in genetics and recording," he adds. "B+LNZ will provide a lot of support along the way, including assistance with recording, and pay for all costs which are over the and above normal farm management."

Archer explains that the AI sires used will be selected from the top bulls nominated by breeders from around New Zealand, which will add quality genetics into the herd during the project.

"In previous projects, some farm managers were wary about the potential extra work-load, particularly with an AI programme, but all were surprised how much could be achieved and how well the project fitted in with normal work."

The programme is designed so it fits in with the farm calendar, doesn't disrupt things too much.

Archer says for the farm personnel involved, there are important upsides including access to a range of experts in breeding and genetics and options to be involved in some off-farm activities too.

"We always make an effort to involve staff as well as managers in the professional development opportunities that come with being part of a project like this," he explains.

"This is an opportunity to be part of an exciting project which will benefit farmers, the industry and New Zealand."

For more information, or expressions of interest, contact: This email address is being protected from spambots. You need JavaScript enabled to view it..