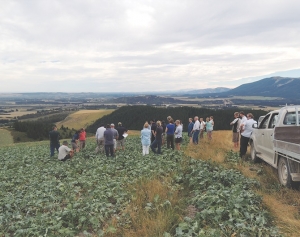 BEEF COWS are out, dairy grazers in and ewe condition a priority on the first FarmIQ demonstration farm to hold a field day this autumn.

With hindsight, some of that was at the expense of ewe condition. Now, they routinely condition score the flock when yarded for other operations.

“Instead of thinking of it as a huge job we’re realising it’s not that big a job and can be of huge benefit to us.”

After “calibrating” their scoring with the first race or two of ewes, they generally split mobs three ways: needs a feed; on target; can go onto clean up duties (ie too fat).

The aim is 150% lambing across the flock. To that end a Lamb Supreme terminal base to the ewe flock is being replaced with Landcorp’s maternal Landmark line.

“We looked at all the data and found there was a huge difference in scanning percentage between the Landmark and the [Landmark] cross with the Lamb Supreme.”

Single-born cross ewe-lambs were scanning 60%, and twin-born ewe-lambs 75% while the straight Landmark ewe lambs born as singles scanned 89%, and their twin counterparts, despite being slightly lighter, 99%.

“EID really nailed it for us that this line of sheep was going to help us get all our ewe lambs in lamb.”

To maximise the rate of genetic gain new rams are put to ewe hoggets to lamb as two-tooths, while a Southdown is used over the ewe-lambs that will lamb as hoggets.

“We’ve found the Southdown pretty effective, not only in birthing but in those early growth rates.”

Growing out their replacement stock is another area that’s been highlighted as offering room for improvement.

“We were producing good lambs that killed well but where we fell over was in our two-tooth and ewe hogget scanning results,” noted Tina Mackintosh.

Target mating weight for ewe lambs now is 46kg aiming for 120% scanning. Tracking growth rates with EID means they have a much closer handle on progress. Different cut-off weights for singles and twin lambs are used to draft ewe lambs to go in a replacement mob.

“If we hadn’t we’d have dropped quite a few twin ewes out of two-tooths,” noted Duncan.

With EID such detailed drafting was no problem, he adds.

“We just plugged the weights we wanted for each class of lamb into the yellow box and they went through and it did its job.”

A draft of tail-enders is used to remove mob pressure and allow preferential feeding of under performers. In the run up to mating weights etc are taken in the corner of the paddock rather than yarding mobs.

Teasers have been used from 17 days prior to mating to get ewe lambs cycling in the past but that was debated at the field day, one farmer present suggesting running rams with the mobs for 48 hours 34 days (ie two cycles) prior to mating date would be as effective, and save the cost of teasers.

However, as another farmer noted later, that can have the effect of synchronising ewes, causing problems come lambing.

Improved forages are another part of the drive to improve productivity, with forage rape, lucerne, lupins and oats all being trialled alongside and as entries to ryegrass and other pastures.

An advantage with lupins and oats is their ability to handle lower pH, hence their use in blocks previously infested with gorse so dense the lime truck – or rather tractor on White Rock’s steeper ground – couldn’t get round.

This summer areas of lupins, sown at 170kg/ha, and oats at 120kg/ha, have gone in on a pH 5.4 block with the aim of getting a handle on which will be the best option in future. In feed value terms lupins have already proven a winner with lambs on them last autumn doing 310g/day, compared to about 280g/day on rape and 250g/day off lucerne, Mackintosh told Rural News.

However, dry weather this season’s caused slow to non-existent emergence of both crops while spring sown rape, which it had been hoped would provide a late summer feed before reseeding with grass, is also struggling.

Extra nitrogen went on the rape in early February ahead of forecast rain but the moisture didn’t eventuate.

As the forage work suggests, the focus on ewe condition hasn’t detracted from efforts to maximise lamb growth and the electronic identification (EID) tags introduced as part of the FarmIQ programme helps keep a close track of weight gains.

That’s allowing them to plan marketing further ahead and lock into contracts, a point noted by field day facilitator Jansen Travis.

“Gone are the days of getting the lambs in the yard and having an argument with the drafter about what’s ready and what’s not.”

Data, compliance, records all seen to

Farm software company FarmIQ says it can manage the data farmers must collect and provide to prove their compliance and sustainability.

Good farm records have helped to relieve a South Island farming business of some of the effects of getting through a Mycoplasma bovis infection, reports FarmIQ Systems Ltd, a software company.

Farmlands Cooperative has bought into the farm software firm FarmIQ, a developer of software for farming and agribusiness.

Who has your data and what are they doing with it?