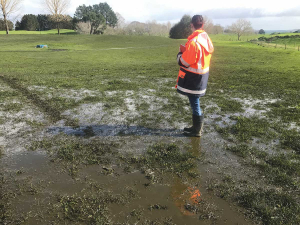 A large dairy farming operation, linked to Fonterra chairman Peter McBride, has been fined $47,000 for an effluent management breach.

McBride is the chief executive of Trinity Lands, but he wasn’t connected directly with the discharge of effluent from the Ronald Lion Farm, Tirau, in October 2019.

Trinity Land’s general manager Andrew Archer and contract milker Dirk Engelbrecht were discharged without conviction for their roles in the effluent breach. Both men agreed to pay council costs.

According to Judge Dickey’s sentencing notes, on 6 October 2019 at around 1.30pm, the council received a report from a member of the public advising of a green stream flowing into the Pokaiwhenua Stream.

On the Ronald Lion Farm, officers found the irrigator located in the paddock alongside the access road running through the Trinity Lands’ properties.  Around the irrigator there were “large dark rings of effluent”, ten metres by ten metres, and ponding on the surface of the pasture.

On closer inspection, council officers noted that the soil was very wet and had been pugged recently.

“There was a strong dairy effluent odour present and obvious effluent accumulation on top of the soil,” Judge Dickey says.

“Council staff followed the effluent flow path along the sloped paddock towards a natural swale and down the slope to a nearby tributary.  There was clear pugging and an accumulation of effluent and water in the holes visible down the length of the natural swale.

“During the inspection, the irrigator turned on and ran for between fifteen and twenty minutes.  It remained stationary and its arms failed to turn for the period of operation.

“The effluent was observed pouring out the end of the nozzles with no fanning or distribution.  The effluent accumulated on the ground prior to flowing down the natural swale towards the ponded tributary.”

The court heard that the breach happened following the installation of a new effluent management system.

Hammond also argued that contamination of the stream was limited but Judge Dickie didn’t accept the argument.

Judge Dickey found the company’s action careless and ruled that it must bear responsibility for the acts of its employees.

She noted note that at the time of the offending the company did not have in place documented farm protocols relating to effluent system operation and management.

“The parties do not need to be reminded that the matter of the appropriate disposal of effluent is a serious one,” she says.

Seven separate court cases against Waikato farmers and businesses have found that they each unlawfully discharged farm effluent into the environment.

The cases have been sentenced over the last three months, with the final case being made public last week, resulting in convictions and a total of $318,025 in fines.

The prosecutions were taken by Waikato Regional Council under the Resource Management Act.

"However, clearly there are still some in the industry who are not taking their environmental obligations seriously and continue to let the side down," he said.

"It is now well over 20 years since the current environment regulation has been in place to manage effluent in this region. I have no doubt that many will be disappiointed to see cases such as these still happening."