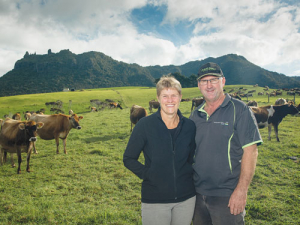 Jagger says they have run a Jersey-Angus cross programme at the 550ha farm on the Whangarei Heads coast for 30 years, assisted initially by his father’s Angus herd. He believes Jersey dairy farmers should pay more attention to breeding and marketing Jersey cross as a valuable sideline for their industry and also to help with the bobby calf issue.

A sixth-generation farmer, Jagger had a grandfather who ran a cream/passenger service up the harbour to Whangarei. With amalgamations, the farm has grown to milking 650 Jersey cows on 230ha and running a dairy beef operation and support block on the balance.

As part of the dairy beef operation, they carry about 250 head of Jersey/Angus-cross cattle.

“If you hadn’t realised, fat is back…. But it is not just about milk, this about the fat that affects flavour in meat.”

He claims Jersey is well placed as a breed for that and Jersey-cross calves need to be treated as part of Jersey dairy farmer’s herd improvement plan.

“We need to look at a herd improvement plan that identifies the cows that we don’t want to take replacement calves from and use better quality bulls over them and… have more of a beef focus on them because there is opportunity in that.”

Jagger says “we want cows in milk, but we can have both if we focus on the right areas”.

His farm makes ease of calving a priority.

“It doesn’t matter if it is a living bull or it is an AI bull; calving ease is paramount and a 600-day growth rate.

“I have just made my selection for bulls this year; we run all AI programme and last year we used short gestation Angus bulls. This year I am not using them because the EBV figure for birth weight was too high. It was at the upper end of what I was prepared to take so I have reverted back to an Angus beef pack that had a more acceptable birth weight.

“So I am quite critical on my birth weight EBVs.

“And I want a 600 day growth weight that is pushing that 100kg level. So somewhere from 90-100 is what I am looking for because I have a programme where I want to grow animals out at two and a half years old and I don’t want something that is not going to grow.”

The Jaggers mate the bottom percentage of cows and heifers to easy-calve high-EBV bulls. They select the cows they don’t rear any replacements from and mate them during the mating process using AI.

“We mate [most] of our top-end heifers for three weeks to AI then the balance go to Angus. We are focussing on the highest genetic material that we want. We tail off with high EBV bulls.”

Jagger says farmers should not be scared to use decent quality beef genetics with calving ease across the bottom end of the herd.

He says dairy farmers are terrible for just wanting the cheapest bull they can finish off with. “We have to set our sights a bit higher.”

LIC teams up with Jerseys

Some of the country’s top Jersey genetics from joint breeding by LIC and Jersey New Zealand are now available to farmers.

Alison Gibb has become the first female president of Jersey New Zealand in its 114 year history.