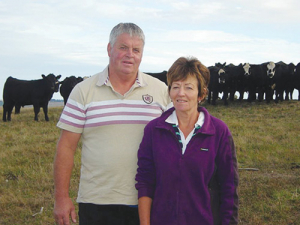 Marty Deans says while initially reluctant to enter the competition it turned out to be a good move for his farm.

Marty and wife Lynette live on Barewood Station, a 6300ha sheep and beef property between Middlemarch and Outram. Barewood is one of eight farms owned and operated by Tom and Heather Sturgess of the Lone Star Farms group.

Deans says he was “encouraged” to enter the station in the 2016 Otago awards.

“I’m not normally the type to enter competitions, but I could see the benefits of being involved with this one. It was a good process and I learnt a lot from it. You get to meet like-minded people and make great contacts in the industry.”

The judges said the station’s farming systems are continually evolving to meet the difficulties of farming in a harsh environment while still achieving above-average production. They say management decisions are optimised by comprehensive measuring, monitoring and the analysis of farm performance.

Deans says he was “pretty chuffed” by the win, even though that wasn’t a key reason for entering.

“I went in for the knowledge I could gain from the judges and the other entrants, but getting those awards was a bonus.”

Deans was impressed with the calibre of the judges and the professionalism of the report he received after the judging process.

“We had eight different judges come onto the farm on two different occasions and they asked totally different questions. But it wasn’t a scary process, more like a general chat over a cup of tea,” he says.

“The feedback they gave was excellent and I was able to ask them questions as well. The advice in the report was useful and the whole thing makes you look hard at what you are doing to improve sustainability.”

Deans was surprised at the number of people he met who had entered the awards two or three times.

“It’s clear they were taking on board the free advice of the judges and using it to improve their operations. So I’ll have another go.”