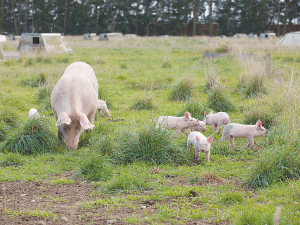 For Freedom Farms, the bottom line for animal welfare is no crates, no cages.

Credibility and consumer appeal can depend on how you translate the five major points of animal welfare into action on farm, says Freedom Farms general manager Hilary Pearson.

It requires taking a holistic view of all the little points --  from how animals can express natural behaviour to environmental effects, she told the ProteinTech19 conference in Auckland

For Freedom Farms, the bottom line is no crates, no cages.

“That is a no brainer. The freedom to express natural behaviour is directly in contrast with keeping a sow in a farrowing crate,” Pearson explained.

“I understand there are people in the industry who feel very strongly about the role of farrowing crates and I understand those systems work for some farmers, but not for Freedom Farms.”

Pearson says Freedom Farms stands for taking it easy on the environment and she reckons some claims about sustainable farming can be just marketing speak.

“My biggest feeling is that sustainability is a mindset and a way people operate. It is not a box to be ticked.”

The company’s farms have environmental audit standards, but they recognise that all farms have different environments, constraints and landscapes.

Pearson says there are misconceptions of environmental management in pig farming.

“In a lot of media communications, free range pig farming has been put up there as the gold standard.”

There are at least 3000 farms in New Zealand running fewer than 50 pigs and she says she fully supports them.

“But it doesn’t work when you are farming at scale... 1200 pigs going to the abattoir to meet the demands of the NZ market.

“That many pigs on any pasture is an environmental disaster.

“Looking at a 70kg pig – the lower end of the weight scale for grower pigs – those pigs are producing 2L of urine and 5kg of poo every day.

“So we cannot have that going into the water table, being blown into the paddock without some control.”

That is why Freedom Farms supports the deep straw shelter, a growing farming system in NZ. All its sows are in the paddocks, each with her own little shelter. She goes into the paddock 10 days before she is due to farrow.

“She builds her nest, she does all the things mum pigs usually do. She farrows her piglets in her little farrow hut and those piglets will stay with her until they have been weaned.

“The mums have single line electric fences to keep them in a space, otherwise they get lost, go into the wrong farrowing hut and start stealing piglets and it all gets a bit chaotic.”

She says the piglets at that time are not fazed by electric fences because they just hoon under them. A lot of people stop to look at the piglets, including tourists buses.

Once weaned they go into deep straw shelters -- big open side barns with shaded spots and sunny spots -- and the farmers build straw huts in them. When the pigs go into the barn they naturally pick a corner to toilet in and all the manure and urine is collected in the straw.

“The pigs will burrow down in the straw, they will eat it and will play on it. All the farmers have enrichment happening in those barns to keep [the pigs] entertained and happy.”

Without those the environmental impact would be beyond what NZ soil can reasonably maintain.

The straw is composted, reused on farm or goes to the retail compost market.

From a sheep and beef farming background, Chilton has been an instructor on the Christchurch Men’s Prison farm for about 20 years.

Pigs thrive behind the wire

Farmers NZ-wide are being urged to lift their biosecurity – particularly on overseas travel and visitors – after a possible outbreak of African swine fever (ASF) was mooted in the Philippines earlier this month.