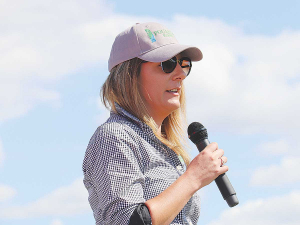 There was the traditional welcome and the Ahuwhenua trophy donated by former Governor General Lord Bledisloe, was ceremoniously brought onto the farm. Guests would hear presentations from the directors and staff of Pouarua farms in a large marquee set up near the farm office. Another marquee was set up nearby for the catered morning tea and lunch.

It was then a chance to do a brief farm tour on foot - the first stop being near the new dairy shed and a chance to get out in the paddocks and to get up close with the herd of Farm A. The event ran like clockwork, albeit a little behind time.

Tasked with organising the day was chief executive of Pouarua Farms, Jenna Smith. She admits it was a huge task to pull the day together, but says everyone from directors, senior managers and farm staff worked well together. She puts the success of the day down to good communication.

"They say that good communication is not what you say, but what people have received and judging by today our communication has been successful," she told Rural News.

Smith says the feedback from the day was positive with people interested in some of the wider innovations taking place on the farms. She says the land is very delicate and susceptible to environmental pressure. They have come up with a vision - healthier food for a better life.

"That is that not necessarily all dairy because it may not be right to continue in dairy and so we are looking at other options for land," Smith explains. "For example, we are pretty heavily down the line on a blueberry orchard and have retired some land that we will use to graze beef cattle on when we have the feed to spare. We are also growing maize to sell."

A big issue for Pouarura and other farms on the Hauraki plains is the summer dry.

The peat soil dries out quickly and last season they had to deal with a six month drought. This year they are four months into a drought. Smith says the answer is to focus on growing grasses and crops that can best cope with the dry conditions.

"We are using those Italian ryegrasses and conserving that in the spring when we can and having that there for summer," she explains. "We go then go into a good summer cropping programme so we are using an early maturing turning, which allows us to get into that in November and set our rotation out a little bit further."

She says they then get into later maturing turnip, which takes them past Christmas and follow that with a sorghum, which has been drilled in behind the early maturing turnips.

Smith says Sorghum is a bit unusual, but it likes the high temperatures - a bit like maize - and she says it works for them, Smith adds that their approach is not prescriptive, because the farms are not a text book operation.

For Smith, who started life as a dairy assistant in Otago, it's been a case of progressing through the ranks of dairy industry. Sadly, she had a farm bike accident early in her career which ended her on farm working days. However, with support from Landcorp, she's had a number of roles - including a stint as a sharemilker, which have eventually led to her role at Pouarua.