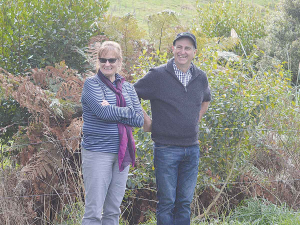 During the farm walk, visitors were shown how fenced-off waterways are teeming with life. Longfin and shortfin eels and upland bully fish that thrive in the streams on the farm were retrieved by Waikato Regional Council ecologists.

Native birds have returned and water quality has improved since the Broughs took over Paerua about 20 years ago – reflecting their respect of land, animals, soil and water. Land use is carefully matched to land capability and the couple is embracing upcoming regulatory changes.

The couple say they entered the Ballance Farm Environment Awards to demonstrate that it’s not hard to be an environmental farmer and how enjoyable the end product is.

The award judges praised the Broughs for skilfully matching land use to land capability. They were also impressed with grazing management that maintains pasture cover and minimises the risk to soils.

Native birds, fish and invertebrates are flourishing on the property, thanks to extensive planting around streams and ponds, and significant fencing of wetlands and drains. The judges commended an innovative biosecurity map that indicates where significant species live.

Two large dams with wetland areas have been created and the couple is planning to fence off significant blocks of mature native bush. Poplar poles control erosion, almost all paddocks have water troughs, and beehives encourage clover growth.

Mark Brough told the field day the investment in fencing waterways and native bushland has been a no-brainer.

“It’s the enjoyment you get out of it…there has been no great negative or positive financial impact on the business.

“We haven’t lost any major farm area from these investments so it’s been a win-win.”

He says fencing off one creek, they would have lost one acre (0.4ha) of productive land.

“We run five sheep to the acre, so that’s $500 a year and we can afford to give up that for the environmental gains.”

The judges were impressed with how the Broughs are approaching upcoming regulatory changes such as freshwater standards, embracing them as a positive step for both themselves and the farm.

David says each farmer must work towards passing good, clean water to the neighbouring farm.

“If each farmer does this, we are all in a good position.”

Farmer shareholders of fertiliser company Ballance are in for a $60 million windfall.