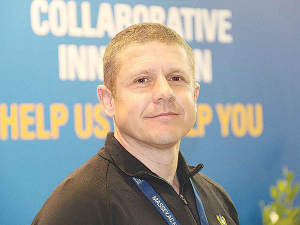 Kenyon, an internationally recognised expert on sheep, recently gave a presentation on the results of a research project into breeding hoggets being undertaken by Massey in conjunction with Beef+Lamb NZ.

He says the decision on whether to mate hoggets is one that needs to be taken carefully and for the right reasons. It also needs to be done within certain strict parameters and knowing that managing these young stock through their pregnancy will require extra time and effort.

Simply, Kenyon says, not all farmers should mate all their ewe lambs every year. A flexible policy is what's required.

He says on some farms it amy be more economical to work on raising the overall lambing percentage of the mature ewes, rather than opting for hogget mating. On the other hand, he points out that if conditions are right, mating the better ewe lambs is an option.

He says a couple of simple rules of thumb are that the hogget should weigh 45kg when she mated and be 64kg the day before she lambs. The latter is based on the fact that the lamb will weigh 10kg. Kenyon believes this is a minimum, if the animal is to get to 65kg when she is mated the following season.

"Regularly tracking of the weight from mating to lambing is critical and they should be growing at 130 grams a day from the day the ram goes out to the day she lambs," he explains.

Kenyon adds that the key to a hogget producing a healthy lamb is feeding good quality herbage and that farmers should not be concerned about a pregnant hogget being too well fed.

"The traditional approach for a mature ewe is that you can shut her down on feed a bit to a maintenance level and then feed her up for the last few weeks of pregnancy and lactation," he explains. "You can't do that with a hogget because, in human terms, she's a teenager and she has to structurally grow - so throughout pregnancy you have to allow her to grow and, at the same time, meet the requirements of her pregnancy."

Kenyon says in the last weeks of pregnancy, it's important to ensure that the hogget is not being fed bulky feeds - such as brassica bulbs or poor quality herbage. This is because the unborn lamb will be putting pressure on the rumen. He adds that during pregnancy, pasture covers should not fall below 1200 kgDM/ha.

He adds that the feed demands of lactating hoggets are higher than mature ewes and farmers may have to drop their mature ewe numbers to accommodate the younger stock.

"You have to pay more attention to your hoggets than your mature ewes because you want them to grow. If they don't grow, they will be stunted for life," Kenyon explains. "A number of studies have shown that if a hogget lambs too light, not only will the survival of her lamb be poor but she will go on to be a poorer two tooth.

"There is also greater chance of her being dry and that her longevity on the flock is decreased too. You really have got to be feeding them well as hogget to make sure they become decent two tooths," he adds.

However, once the hogget has lambed she can be treated like other ewes in the flock. According to Kenyon, the same guidelines for feeding a mature ewe now apply to a hogget. That means not allowing covers to drop below 1200g DM/ha and not restricting their feed intake. He adds that herb-clover mixes and lucerne have shown to increase the growth of lambs born to hoggets at weaning.

The study on hogget breeding is about three years into its six year programme. Kenyon says they are looking to see if a heavier hogget breeding weight means she is heavier for life and potentially less efficient and whether the progeny born from hoggets make suitable replacements.

Has the Wiltshire's time come?

One of the key speakers at a recent Massey University Wiltshire field day was Marton farmer Richard Morrison.