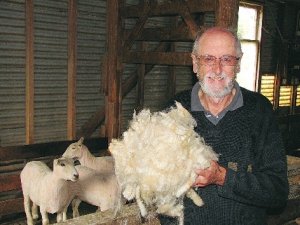 THE ROLE of daylength in sheep breeding is well known, but what about wool?

“Light acts on a gland at the base of the brain and this determines the rate of growth of a wool fibre,” explains Dr Roland Sumner, AgResearch, one of New Zealand’s leading wool scientists.

“When wool is growing there is a joint relationship between increasing diameter and length and when these two factors are in phase and wool is growing faster, it’s coarser. You cannot change that light is the basic controlling factor,” he told a recent Beef + Lamb New Zealand field day in the Wairarapa.

Romneys are very light sensitive, Merinos much less so, he explains.

That’s reflected in a “relatively restricted” breeding season for the Romney, but much longer potential mating period with the Merino. Similarly, there’s little variation in rate of wool growth with a Merino, but much more with the Romney.

“Historically it’s noted that the further away from the equator that the type of sheep evolved, the greater its sensitivity to changes in day length with changing seasons.”

Besides light, Sumner says a host of other factors impinge on wool growth, most of which are sometimes beyond control of the farmer.

Feeding is the classic example. Wool naturally wants to grow twice as fast in summer as it does in the winter.

“This is difficult to deal with when you’ve got a drought.”

The problem is, in terms of partitioning nutrients by sheep, wool growth is a low priority. Energy for maintenance and warmth comes first; then the demands of the developing lamb in the womb; then milk production, ewe body growth and last wool growth.

Sumner says in times of shortage sheep grow just enough wool for survival, but no more.

“Once you get over that, wool is nothing more than a sink for surplus protein. You get high fleece weights in good seasons like the one we are having now. If there is a drought wool growth suffers first. There’s nothing we can do about it. It’s a fact of life and nature.”

When it comes to shearing, the act itself has little impact, as it’s all over within a minute or so. But there is stress following shearing on account of the animal having suddenly lost its insulation. How much stress depends on time of shearing and feed available, especially for ewes, for about four weeks post shearing.

“The sheep gets cold and its body mechanisms immediately demand more nutrient to increase its energy supply just to keep itself alive. In good conditions it’s fine but if the weather is adverse the sheep can get hyperthermia and possibly die.”

Breed and inherent fleece weight, physiological state and fat reserves are important considerations in determining shearing strategy, as is market.

Winter shearing produces a product that buyers like on account of its soundness, but the weather risk to the ewe is greater, while summer shearing can produce unsound fleece wool due to reduced diameter and lower tensile strength in the middle of the staple.

However, shearing in winter can benefit lamb survival and increase birthweight, he notes.

It’s a matter of weighing up all the options and making the best decision for the farm in question.

“Every farm is different; every year is different. I want farmers to understand the basic biology behind wool growth to allow them to develop the best production system to suit their farm and its climate.”

As small as a pen, so easily popped into a shirt pocket, the new Narva LED Pen Light packs a powerful lighting punch.