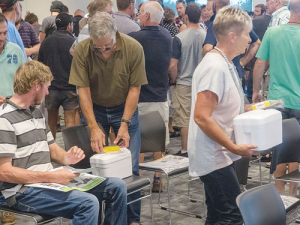 Canterbury farmers collect their milk sampling kits at a recent meeting in Dunsandel.

Good farm records have helped to relieve a South Island farming business of some of the effects of getting through a Mycoplasma bovis infection, reports FarmIQ Systems Ltd, a software company.

MPI placed a restricted place notice on two properties owned by Lone Star Farms in mid-January because they had infected calves. Lone Star was among the first non-dairy businesses identified with the disease.

“We brought in about 400 calves for rearing -- 200 of them from a Southland property later found to have M. Bovis,” says Lone Star general manager Boyd Macdonald.  “So we know exactly how it’s got here.”

The calves were reared on one block of Caberfeidh, Lone Star’s 5300ha farm in Hakataramea Valley, and then just a week before the disease discovery half of them were sent to another farm -- The Wandle (1950ha) in Middlemarch. Both are large farms involved in trading, and they winter about 55,000 stock units between them.”

“Staff record any movement using the FarmIQ app on their phone,” Boyd says. “Tim in our office was able to take the records and produce a report with help from their support desk. It meant we could prove where the calves have been and what animals have been in close proximity.”

This has helped the farm explain the situation to near neighbours and has resulted in a smaller area being placed under restriction.

Boyd says since finding out, the company has invited all the immediate neighbours of each farm to a meeting at which they were shown exactly where the calves had been, using a map in FarmIQ.

“That was useful; they got an understanding that we had a good handle on where the stock had been and that we can contain and isolate it within our own farm.

“We know 100% where the calves have been and what other stock had been around them,” adds Caberfeidh farm manager Matt Smith. The FarmIQ records could tell us, then it is possible to see what risks are associated with them.”

The MPI case manager and a vet checked the Lone Star stock records and as a result in mid-February it allowed the area on Caberfeidh that is covered by the notice to be reduced to a third of the farm. This helped cut the time and mental stress experienced by the farm staff, says Smith.

“The restricted place notice means we have to have a permit to do many things and wash anything that goes in or out of the area. You have to be vigilant and think through the impact of everything you do.”

Boyd says having good information in a biosecurity situation was an unexpected benefit of using the FarmIQ software. Four of the Lone Star farms have used the software since late 2015.

“This whole thing has been a wake-up all for all of us about managing biosecurity.”