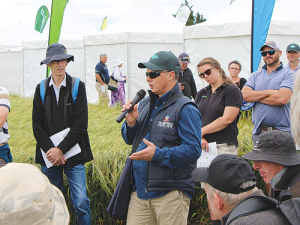 Dr Peter Boutsalis, of the University of Adelaide, gives a presentation on herbicide resistance at the FAR CROPS Annual Expo held at the Chertsey research site, Mid-Canterbury, in December. SUPPLIED.

Boutsalis, a post-doctoral fellow at the University of Adelaide who also runs a private plant science consultancy for Australian farmers, was the featured overseas speaker at the Foundation for Arable Research (FAR) 2018 CROPS expo held at FAR’s Chertsey research site in December.

He says a few of the NZ arable farmers attending the event admitted to having a resistance problem and put their hands up when asked.

Boutsalis’s main message was that if farmers are relying heavily on herbicides they should rotate them, mix them and “keep up the good work they’re doing” in diversifying agriculture.

“Cropping in Canterbury is quite diverse still,” he told the expo. “That’s why resistance has been delayed so much compared to in Australia, where they’ve got continuous cropping and very limited crops.”

Boutsalis says a big difference between NZ and Australian practice is that Australia has moved to a low-tillage system -- simply drilling into the stubble. He said this helps with moisture retention and erosion control (and gives some assistance to pre-emergent herbicides since weed seeds remain confined to top layers) but means they are generally heavily dependent on herbicides for weed control.

Boutsalis said non-herbicide techniques being used in Australia include capturing seeds at harvest, removing seeds before they mature with hay or silage and concentrating weed seeds into windrows that are burnt or used as feed.

Glyphosate can sometimes be used in wheat and barley, if the crop is mature enough not to be affected by it, but the weed species are still young.

Boutsalis says 2018’s severe drought in New South Wales provided an unexpected weed control opportunity for South Australian farmers, because the price of hay doubled to $300 a tonne and made it financially worthwhile for them to bale up their entire crop before it was mature – along with any weeds before they had set seed – and sell it as feed to NSW.

“So for one year, you got 100% control of weeds. And that is a very effective strategy,” he said.

Annual ryegrass is the most problematic weed in southern Australia, followed by wild oats and chickweed.

In his presentation to the expo, Boutsalis tabled figures from ten years of pot tests done on 2000 randomly chosen ryegrass samples, showing resistance to various herbicides ranging from zero or low single figures, up to 60 and 65%.

As part of his consultancy business, Boutsalis offers a pot test service for farmers who can send weed samples for testing so they can be advised which herbicide to use in the current season.

“That’s the power of the commercial pot test. You can actually fine tune what the situation is in your particular field,” he said.

“Resistance can start slowly and unnoticed, then one year – bang, it just explodes because enough of the survivors have set seed.”