Study on sheep's impact on water 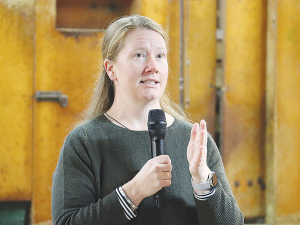 While there is clear proof that cattle, deer and pigs cause poor water quality when allowed to graze near waterways, little is known about what impact sheep have. Peter Burke reports on a research project being run by Massey University to find out more about how sheep behave around streams and waterways.

The trial is taking place at one of Massey's research farms, Tuapaka - just north east of Palmerston North.

It's being undertaken by a team of scientists led by Dr Rene Corner-Thomas, a senior lecturer in sheep production at the university. The trial involves monitoring a flock of 40 ewes grazing on a section of steep hill country, with a small stream running through the paddock.

Corner-Thomas says the actual focus of the trial is a section of the stream which has been set up to monitor the behaviours of the sheep. This monitoring is carried out at specific time of the year to reflect the seasonal effect of the sheep and the stream.

"We are using a combination of trail video cameras that are triggered by motion of the sheep," she told Rural News. "It records 24-hours-a-day using infra-red technology.

"So, we are basically able to spy on the sheep 24-hours-a-day. We are also using GPS collars on the sheep to track their position in the paddock so we can use that to determine where they spend their time. We can also calculate how far they walk, what speed they walk at, when they are most active and when they are least active."

Corner-Thomas says the researchers are also using monitors with bluetooth proximity built into them, which records when a sheep is within three metres of the riparian zone around the water way.

When the sheep are brought into the trial area, a water trough is provided for them. However, after a week, this is covered up so the animals don't have access to it and would therefore naturally seek water from the stream.

She says one of the challenges with the trial is the role the weather plays. If the grass is green and plentiful, the sheep don't seek out the water because of the moisture content of the grass.

"Basically, what we are seeing is that the sheep are not interacting with the waterway very much and that they predominantly spend most of their time on the flatter areas of the paddock where there is plenty of grass available and so they conserve energy," she explains.

Corner-Thomas says the study has, so far, shown that the sheep spend a mere 0.2% of the study period in the riparian zone. And when they are in this area, 68% was spent grazing, 15.9% resting and only 2.2% actually drinking from the stream.

"In terms of drinking behaviour, half the ewes did not spend any time in the riparian area, only five ewes were seen to actually drink and another five just sniffed at the water," she told Rural News.

The trial has shown no evidence of the sheeps' hooves damaging the banks of the stream. However, that is not surprising given their small size compared with cattle and deer.

Corner-Thomas's team has set up scientific instruments in the steam below where the sheep are grazing to measure any sediment loss with the results, thus far, negligible. These instruments also measure E. coli, suspended sediment, phosphorous and nitrates.

The study is ongoing and Corner-Thomas and her team hope to have some updated results available soon.

However, based on the results so far, it would suggest that the effects of sheep on water quality in farm streams is at best minor.