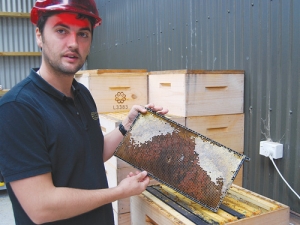 North Canterbury beekeeper James Malcolm is going from strength to strength in a fast-changing industry facing the challenges of increasing corporatisation, new technology, parasites and even hive thefts.

Honey harvesting is over for the year and hives in high country, near sources such as manuka, have been brought down to the warmer plains for wintering.

Rural News caught up with James Malcolm at his base at Okuku, near Rangiora, North Canterbury, in the middle of his two-month winter low season. Trading as Natural New Zealand Honey, Malcolm has about 3150 hives and plans to increase that to about 4000 in the coming season.

During the season most of his hives are placed within 40km of base, anywhere between the Waimakariri and the Clarence rivers, and on the West Coast between Ross and Fox, where rata and kamahi honey are harvested.

He also breeds queens for his own re-stocking and for sale to other beekeepers.

Aged just 28, Malcolm has built his business in just ten years, starting from "curiosity," helping out a beekeeper who kept hives on his parents' farm near Ashburton.

That led to an apprenticeship with Midlands Apiaries, Ashburton, and setting up his own company about six years ago. He now partners with Midlands, which does his honey extraction and packaging to market.

"It started from humble beginnings: ten years ago there were ten beehives," Malcolm says. "Now we've got just over 3000 hives and our queen breeding programme, with 1600 mating units."

Last year he harvested 115 tonnes, including about 50 tonnes of manuka honey.

Malcolm employs 14 staff and has four new apprentices lined up to start in the coming season, from 137 applications. He says that unlike some big corporate producers who employ many foreign workers, he is happy to employ people living within 45km of Christchurch. He says when looking for staff he is "real big" on relationships and culture.

"The type of person we're looking for is a well-rounded person with a lot of different skills. They don't all need to be the same."

The industry is getting very corporate, he says. The pressure is building on the smaller operators to either team up or tuck under the wings of the big players.

Malcolm says hives have traditionally been sited on farms under relatively informal arrangements with landowners, who get the benefits of pollination of crops and clover and the "feel-good factor" of having bees around.

But now all his manuka-harvesting hives are sited under percentage profit-sharing arrangements.

"On high-country farms, farmers have been fighting manuka forever, as far as trying to get rid of it," he explains. "So it's a transition where they're saying 'hey, we've got this resource that's worth money'. For them it's diversifying away from sheep and beef.

"They can let some of their back country go – stop wasting money on chemicals and diggers and dozers clearing it – and harvest money from it."

Earlier this year, Malcolm had 24 of his queen-breeding mating hives stolen from a site at Sefton. Although the theft would have needed some organisation, he's not sure the thieves knew what they were doing, otherwise they may have taken all 100 hives from the site.

"They would have opened them up then thought 'what the hell is this?' It looked like a normal beehive, but inside there's two separate mating units. If they had some beekeeping knowledge they'd have pinched the right thing."

Malcolm has since investigated using GPS tracking as a possible theft deterrent, but found it too expensive. However, he is now experimenting with surveillance cameras and electronic tracking of individual honey frames.

For this season, he will bring in NZ-made plastic honey frames with NFC (near-field communication) chips. The wooden boxes which carry the frames and stack together to form the hives will also have RFID (radio-frequency identification) chips.

He expects this tracing to become the national standard, allowing traceability throughout the process.

About 95% of NZ honey is exported. Malcolm says a major change in the industry has been a move to package for retail here in NZ rather than export in bulk, to add value and to combat counterfeiting of high-value manuka honey.

Three years ago about 80% of honey was exported in bulk and about 20% packaged, but those statistics have now reversed.

"That has transitioned in a very short time, to add value and integrity of the product so that it's tamper-proof. It's produced and packed in NZ so it's not blended with honeys from around the world. People have been shafting the system for a long time."

It reached North Canterbury about six years ago and has now spread nationwide. Killing the mite is usually done by miticide strips hung in the hives.