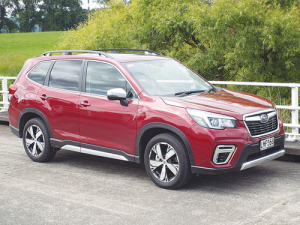 2019 Subaru Forester picked up Car of The Year award from the NZ Guild of Motoring Writers.

Now, after a week with it in the North Island, it’s easy to see why it has won the Car of The Year award from the NZ Guild of Motoring Writers.

For a starting price of $39,990, no other vehicle now on the NZ market has the same mix of practicality, performance and cutting-edge technology — particularly in a safety sense — for such a reasonable price.

Hugely popular with rural folk, and townies with an urge to hit the great outdoors, the Forester first saw the light in 1997. Now, after several evolutions, it has hit its straps for 2019: this vehicle will satisfy all who long for an SUV.

It’s a good looking, mid-sized SUV, achieved with exterior design changes that have removed some of the previous ‘boxiness’.

Start with the well-known Symmetrical AWD system, add in X-Mode to tackle mud and snow in the Premium version, heaps of ground clearance, and lots of reworks to the torsional and lateral rigidity, then you’ll get the general idea.

A flat four, naturally aspirated petrol boxer engine of 2.5L gets things off the mark promptly with 136kW and 239Nm; it’s best described as perky rather than rapid. The Lineartronic CVT system uses clever software to mimic 7-steps in the transmission, with paddle shifters for drivers who like to be in control. This reviewer prefers to let the car do its own thing, with progress smooth and unhurried.

On the road, the seats offer plenty of support and masses of adjustment; grip and cornering ability are like travelling on the proverbial rails, and braking is equally impressive.

The technology matches and exceeds fitments seen in far more expensive brands. For example, recognition software stores the seat, mirrors and AC settings for up to five people and adjusts them automatically. Add to this driver monitoring that detects eyes off the road or fatigue (there’s an off switch for over-the-hedge farmers), crash avoidance, land keep assist and centring and a speed limiter.

Add in practical features such as front, rear and side-view cameras, reverse automatic braking and reverse interlocking door mirrors that tilt down when reverse is selected, and the Forester is really the business.

As for TV’s Hilary Barry moaning about the lack of heated seats, she should know that real country folk will already be wearing long-johns if things are a little cool around the nether regions.

A firm favourite of rural families and those seeking to get off the beaten track, Subaru has announced the introduction of its first battery electric vehicle (BEV) with the longawaited Solterra all wheel drive SUV confirmed for here in early 2023.

Outback now in its 25th year

Now in its 25th year, and sixth edition, the 2021 Subaru’s Outback wagon was recently launched in New Zealand.

Forester gets a little spark

Given that we already know already the Subaru Forester is a great SUV – after all it won the 2018 New Zealand Car of the Year Award – we were keen to get to grips with the latest e-Boxer Hybrid.