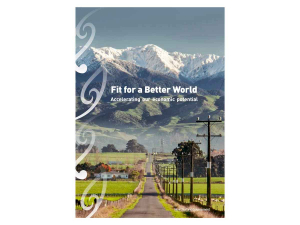 Unfortunately, we are in election mode and it seems the Government has hijacked the PSC report, named Fit for a Better World Roadmap – Accelerating our Economic Potential, and turned it into a bunch of slogans, rather than any meaningful strategy.

The report claims to want to lift primary sector exports by $44 billion in the next decade. In 2019 the sector’s exports hit $46.5b – so the report’s target requires a doubling of current primary sector returns.

The report is padded with pages of case studies – the likes of Allbirds shoes, First Light Wagyu beef and proponents of regenerative agriculture extolling its virtues. All the while, merging existing plans for spending, already announced, on tree planting and water improvements in the Budget.

It groups the goals of the action plan under three titles: Productive (changes to what and how we produce food), Sustainable (regenerative agriculture, the Government’s existing emissions targets) and Inclusive (wellbeing, jobs, communities).

However, one can’t help but agree with the view of one commentator who described it as: “long on generalities and light on any real detail”.

When you look for the ‘how’, as in how is this going to happen, it appears the answer is a reliance on the Maori concept of Taiao – in keeping with the Māori natural world – and regenerative agriculture!

Really? That’s where the sector is going to magic up an extra $10 billion per annum in earnings for the next decade?

As for attracting 10,000 people to work in the sector – again, how? There has been little interest from New Zealanders in careers in the sector for the past 30 years – hence its reliance on migrant workers. Now, all of a sudden, the good and great are going to be flocking to jobs milking cows and driving tractors? Yeah, right!

Meanwhile, the report states that NZ should not be a volume producer – and we should stop acting like one. “Selling commodities in undiversified markets is a race to the bottom.”

All this on the back of the latest GDT auction result, which saw prices for the big-volume dairy category, wholemilk powder (an evil commodity), leap by 14%.

Clearly this Fit for a Better World Roadmap is not even fit for the paper it was written on!