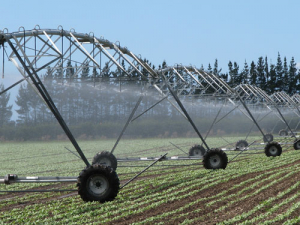 Centre pivot irrigators are among the most water-efficient means of irrigation. Regulations and limits on water availability encourage their use by farmers.

Irrigation NZ believes that imposing a nationwide water tax would be unworkable.

Instead, the biggest improvements in water use efficiency would be achieved by allowing irrigators to continue to modernise their irrigation systems.

Other countries have considered water taxes but all have abandoned such ideas because of the complexity and expense.

The Interim Tax Working Group report touches on some of the complexities of a water tax, e.g. the need to address Māori rights and interests; and many more issues are yet to be examined.

But it is good to see the report recognise that many groups use water, and that taxation would not just affect irrigators. In Canterbury, for example, 55% of water is consented for hydro-generation, 29% for irrigation and 16% for other uses.

The tax working group sees a water tax as a way to increase water use efficiency. But regulations and limits on water availability are already driving the adoption of more efficient irrigation systems. This is reflected in NZ agricultural production survey statistics that show a big drop in the use of flood irrigation systems which now service only 5% of irrigated land.

Modern irrigation systems cause less water and nutrient run-off, which is good for the environment. But they are expensive: in Canterbury some irrigators will need to spend a total of $80 million replacing their irrigation systems to meet new council rules.

The Government and the primary sector agreed this year that audited farm environment plans should be introduced nationwide to improve farm practices, including irrigation efficiency. Irrigators have already spent a lot of time and money on meeting the requirements of farm environment plans.

A blanket national water tax would make it more difficult for farmers and growers to install more efficient irrigation systems. It would reduce the amount of money available to change farm practices by adding a new cost for irrigators.

Other countries are spending more on water infrastructure as governments recognise they need to store water in an increasingly volatile climate to provide communities and food producers with secure water supplies.

A water tax could make the development of new water infrastructure like the Waimea dam less viable at a time when NZ must also prioritise developing more rural and urban water storage.