Don’t mention the ‘B’ word!

Written by  Kirstie Macmillan, director of Farm To Farm Tours 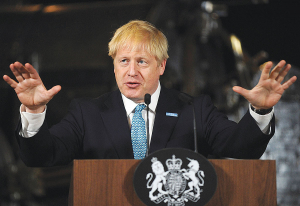 New UK PM Boris Johnson – along with Brexit – were two of the key talking points of the recent NZ farmers’ tour to Britain.

OPINION: You'd be forgiven if your eyes were starting to glaze over reading yet another Brexit headline, but we seem to be getting to the sharp end of things now.

Setting off on our annual UK and Ireland farming tour in June, we knew Brexit would be a hot topic. It was pretty clear a day or two into our trip just how frustrated the British people are with the status of this 2016 decision to leave the European Union.

About 30 million people voted and the ‘leave’ voters won by a close margin -- 52% to 48%. It’s easy to understand why the process has been hard going, with aspects like ‘the divorce bill’ and the ‘Irish backstop’ being particularly tricky.

After hearing heartfelt points of view and exasperation during our first few farm visits, we decided it was best practice not to mention ‘the B word’ unless it was first raised by our hosts. Inevitably it would come up, mostly the uncertainty and how the farming industry will adapt to a post-EU Britain.

We heard various perspectives, but immigration frustrations and the bureaucracy of Brussels were a motivator for many in England and Wales, both with a majority of ‘leave’ voters.

Most farmers we met in Scotland felt differently. A majority of Scots voted to remain in the EU. Many cannot see how they will survive without the extended European trade opportunities and feel uncertain that Westminster’s promises to the south will be extended to the north. Scotland’s First Minister, Nicola Sturgeon, is even calling for a new independence vote.

From a farming perspective, many Scots value the EU as an important source of affordable labour (eg Poland, Romania) and the EU’s single farm payment remains a significant proportion of income for many British farmers.

The Irish have their own concerns about Brexit. Like Scotland, a majority in Northern Ireland voted to remain in the EU. While there are still tensions, Northern Ireland has experienced 20 years of relative peace following ‘the troubles’ and they want this to continue. They fear that a return to a ‘hard’ border could cause a new wave of tension, not to mention the practicalities of movement and trade with a ‘hard’ border in place.

Brexit, we discovered, isn’t the only troublesome ‘B word’ in the UK right now. There’s also Prime Minister Boris Johnson. After three weeks of travelling and meeting locals throughout the UK, we were yet to meet one of his supporters. But clearly, they’re out there.

• Kirstie Macmillan is a director of Farm To Farm Tours

OPINION: The word uncertainty has taken on a new meaning for farmers in the past six months.