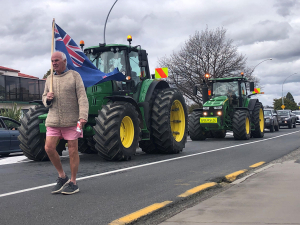 There is talk of another Groundswell NZ protest on August 16.

Organisers can take a bow. This was a massive turnout that was well suppported, well managed and generally respectful (except for a couple of outliers).

Attempts by critics - mainly urban liberals, government apparatchiks and ticket clippers on social media - to label it as just a 'ute tax' protest have failed miserably. Fair-minded people saw a group of New Zealanders expressing their utter exasperation and legitimate complaints about the way their sector is being mistreated. That message has been delivered loud and clear.

There is now talk of another protest on August 16; let's hope that is just talk. A soufflé does not rise twice, and Groundswell NZ needs to ensure the goodwill and support of the country has for farmers isn't lost by overdoing the protest thing.

Meanwhie, although not unexpected Labour MPs - especially those supposedly representing rural and provincial NZ - were conspicuous by their absence. These same MPs, who were only too happy to run around at Fieldays this year fighting over who would carry the PM's handbag, did not have the guts to front up to their constituents.

Rural and provincial NZ will remember this and vote accordingly in 2023. Surely a Member of Parliament's job is to hear electorates' concerns - even if they don't like them - and report these back to the powers-that-be.

Agriculture Minister Damien O'Connor was another unsurprising no show, his weasel words claiming that 'plenty of farmers' support the Government's direction is about as accurate as a leaky rain gauge.

The other question farmers should be asking is why organisations like Fonterra, Beef + Lamb NZ, DairyNZ and the big rural retailers reportedly sent out directives telling staff not to take part in these protests.

As Morrinsville Lloyd Downing says: "They seem happy to be in the tent looking out... perhaps they should be outside with the people who pay their wages and throw a few bombs into the tent."

It's clear where the loyalties of the leaders of these outfits lie, and it is not with farmers who pay their huge director fees.

Farmers need to decide if these organisations really have their best interests at heart. The evidence so far is debatable.