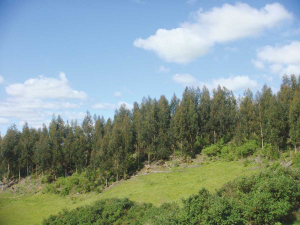 OPINION: By the time this is published, a group representing everything good about provincial NZ will have marched on Parliament under the 50 Shades of Green banner.

I’ve never had much interest in trees. I have always enjoyed their ‘fruit’ – whether a physical product I could eat, a picture of might or magnificence in a singular or landscape perspective, or simply shade or shelter.

We have been hearing recently of large tracts of NZ pastoral farmland being acquired for conversion into forestry, or as 50 Shades of Green have said: “The blanket planting of good farmland [has] reached crisis proportions’’. More accurately, it is for conversion to forestry to allow national and international corporations to offset their carbon dioxide emissions.

I can understand the benefits of planting trees on many tracts of New Zealand’s pastoral land. Many farmers have already done so to stabilise land -- along riparian strips, in gullies and on steep faces. Often farms have a mix of harvestable exotic species or longer-term natives.

This is not a model our carbon dioxide offsetting participants have in mind. Their intention is to blanket the landscape in a monoculture of pine plantation. And our Government’s policy is to encourage these large corporate emitters to use our country for waste disposal to meet their their carbon commitments.

The cry from the policymakers is that it’s uneconomic farmland and that it’s best use is trees. Of course, anything can become economic if there’s enough Government intervention to make it so, or uneconomic if there’s enough of the opposite. Skewed market forces contribute to the analysis, and in this case are doing so to the detriment of this nation and the world’s future.

Prior to this upheaval this farmland was at its economic, biological and social optimum. Each farm sustained a family (or two or three) which in turn sustained a village or local town, a school, a supermarket etc.

Annually, each farm nurtured a crop of livestock to point of sale to their local processor (who sustained several families which in turn sustained regional towns). Once processed, the produce was marketed to families worldwide.

Back on the farm, the cattle and sheep were run under an extensive all grass system. The healthy soils under which the pastures grew stored sequestered carbon. These pastures photosynthesised, processing the carbon dioxide from the atmosphere and the clover amongst the grasses fixed atmospheric nitrogen in the soil.

On the steeper faces where stock preferred not to graze, brushwoods and a variety of native trees grew.  Biological diversity abounded and interacted across pasture and bush. Everything had a natural order and an economic sense and such was the equilibrium that this format had existed for a century and was capable of existing for centuries to come. What’s more it involved no government intervention.

But all that was before.

Our country has a natural environmental advantage in the growing of pasture. Because we have systems and skilled farmers who use a pasture-based system we are able to produce red meat and dairy product much more efficiently than other countries the world over.

This natural advantage is an asset that we, as a country, are expected to utilise as an upstanding global citizen to “end hunger and safeguard food security in a manner that does not threaten food production”.

Unfortunately for ourselves and the world, the food we will no longer produce from that now-forested land will be produced in another country under a less efficient biological system. If this production is not met with an equivalent mitigation it will undoubtedly lead to faster global warming. Even if it is met it will have added another layer of cost and complexity.

Compounding the issue is that global population growth is expected to be 82 million this year, adding to a world of seven billion-plus. That means the equivalent of another country the size of New Zealand’s population every three weeks demanding more food, which will be produced increasingly less efficiently.

Global warming is indeed a global problem. Trees can be grown in many parts of the world but few can produce food as we can.

It is mindlessly short-sighted to offer up New Zealand land to be the toilet bowl into which outsiders can dump their carbon dioxide commitments at the expense of producing the world’s most sustainable and natural pastoral produce for a growing world population.