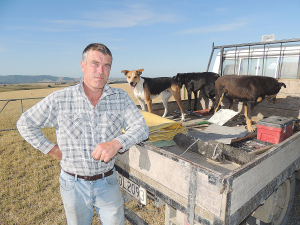 Miles Anderson says for a large number of farmers, the sheep and beef sector has been anything but profitable over the last few years.

Certain assertions were made, including attributing the loss of the wool levy at the feet of the Wool Board, the profitability of sheep and beef farming over the past five years and the mandate for B+LNZ in the advocacy space.

There is no doubt that the legacy of the Wool Board and its actions contributed to the loss of the wool levy. But it was B+LNZ (Meat & Wool as it was known then) that collected and administered the levy at that time (the Wool Board was long gone). Responsibility for that result also rests with them as they managed to alienate levy payers by seemingly treating it as of secondary importance and not listening to them.

For a large number of farmers, the sheep and beef sector has been anything but profitable over the last few years - with climatic conditions and the impact of Covid on processing combined with the costs associated with wool having a severe impact on their profitability. Farm running expenses have also climbed substantially in the last few years.

Those that have had some increase in profitability have been finishers who have been able to buy store stock relatively cheaply and capitalise on buoyant prices. The sheep population continues to drop and, in my opinion, we are faced with a crisis that may see meat companies forced to rationalise once again if the current trend continues. It will be the farmers and their communities that pay the price if this occurs.

B+LNZ stated that they have the mandate to act in the advocacy space due to the results of a survey of levy payers. The fact is the survey only elicited responses from a fraction of levy payers and the survey questions were designed to get the answer you wanted! That is hardly a mandate.

The truth is that B+LNZ and other levy bodies (years before any 'survey' was completed) went to the Minister and had the Commodities Levy Act changed to allow them to do so without putting the issue to all levy payers.

As immediate past chair of Federated Farmers Meat and Wool Industry Group I have first-hand experience of B+LNZ 'advocacy' and the 'collaborative' approach they claim to undertake with Feds, and it leaves much to be desired.

An example of this would be our respective submissions to the Primary Production select committee in regard to the NAIT review a couple of years ago. Part of the Ministers' proposed changes included bringing sheep into the NAIT system. Feds and B+LNZ agreed to share information and to align our submissions. Feds had consulted with members in the provinces (who also are B+LNZ levy payers) and our Meat and Wool provincial representatives had discussed and given directives as to what our position should be at a National Council meeting. It was decided that we would oppose the inclusion of sheep in NAIT for several reasons:

The NAIT system had numerous deficiencies that farmers were experiencing with cattle and deer which would only be amplified by the inclusion of sheep.

Tag retention in sheep was highlighted as an issue by those farmers that were currently using EID tags.

Extra regulation and compliance at a time when farmers are drowning in regulation was undesirable.

Costs were a major concern.

Lack of poor connectivity in many areas already causes frustration for farmers trying to use the NAIT system and htis would be worse if sheep were included.

It was also agreed by the National Council that when these issues were addressed, we would revisit the topic.

This formed part of our submission and was shared with B+LNZ. The information supplied to us from B+LNZ made no mention of the subject. So, you can imagine my surprise when B+LNZ presented their submission and it included a section encouraging the government to include sheep in the NAIT scheme.

To make matters worse they had been suggesting to Feds that we remove any mention of sheep and NAIT in our submission. Luckily, I felt it should remain in as that was what the membership had directed us to do.

Why would B+LNZ have done this? It transpired that B+LNZ wanted to get a pilot programme on EID in sheep up and running but didn't have the funding and wanted to get government funding to do so. Knowing that the Minister was very keen to have sheep included in NAIT had influenced the way they submitted. This is just one example.

In conclusion, I think that B+LNZ should firstly own their part in the loss of the wool levy, urgently address the root causes of the continual shrinking of the sheep flock and remove themselves from the advocacy space as they are compromised and have demonstrated a lack of integrity when they have been involved.

Does this mean I want the levy vote to fail> No, definitely not! I believe in the areas of market access, R&D and extension - they are vital to the success of the sheep and beef sector - but I do not support the increase in the levy itself.

The amount of levy payer's money that is wasted on advocacy would be far better spent on what their original mandate was for. It is ironic that when our levy groups provided the technical expertise, and Feds the lobbying, our sectors had far better outcomes for farmers than we do today.

Miles Anderson is a South Canterbury mixed farmer and immediate past chair of Federated Farmers Meat and Wool Group.

The forecast for global sheepmeat and beef demand is positive for the 2021-22 season supported by  solid market fundamentals, strong demand and tight supply, according to Beef + Lamb New Zealand’s (B+LNZ) New Season Outlook 2021-22.