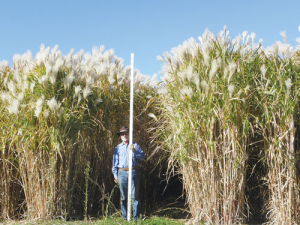 A tall grass touted as a multi-purpose wonder plant has proved its worth as a shelterbelt replacement for Canterbury dairy farms, says Lincoln University ecology professor Steve Wratten.

Research by Lincoln University PhD student Chris Littlejohn, supervised by Wratten and originally funded by Westland Milk Products, looked into the performance of six L-shaped trial plots of miscanthus grown on a dairy farm at Aylesbury, about 30km west of Christchurch.

On dairy farms where traditional shelter belts have been removed to make way for pivot irrigation, Wratten says miscanthus can act as windbreaks and be harvested for supplementary income.

Wratten said they identified 15 specific benefits such as shelter for animals and increasing biodiversity as habitat for the likes of skinks and bumblebees.

Not only do cows appreciate the shelter, the research confirmed that pasture itself does better in the lee of the miscanthus. In windy conditions the stomata of green plants – the tiny ventilation holes in the outer skin – close up and throttle the plant’s metabolism, but the shelter provided by miscanthus mitigates that effect.

Separate plantings of miscanthus along about a kilometre of the farm’s road boundary are now testing the ability of a soil fungus known as trichoderma to help plant growth.

In a randomised trial in which different sections of the plot got different blends of the fungus, or none at all, some sections are already showing good results in what Wratten says was poor stony soil previously full of broom and eucalypts.

With miscanthus capable of yields of up to 40t DM/ha, Wratten is now seeking funding for trials on converting the harvested grass into biodiesel.

While the diversion of productive land for biofuels production could be controversial, Wratten emphasised that as a by-product of its other uses, miscanthus biodiesel would be a truly renewable resource that need not compete with food production.

The only New Zealand supplier of the plant is Miscanthus NZ, whose managing director Peter Brown said it had been “a long slow process” getting miscanthus accepted since he began propagating it from plants imported in 2010. “But people are starting to get serious about it.”

Miscanthus is a long-lasting perennial, the tops browning off in autumn and the grass renewing itself in spring from underground rhizomes. As a sterile hybrid, it can only be propagated vegetatively so seed-borne spread is impossible and it is considered unlikely ever to become a pest.

Because it is palatable to stock, grazing would take care of any rhizome spread beyond the fenced plantings on dairy farms. Brown says there has never been a recorded spread beyond planted areas.

Fonterra has a 2ha trial plot of miscanthus at its Darfield plant, where it has had a dramatic effect on reducing nitrogen leaching from the factory effluent sprayed onto the pasture.

Lysimeters below the miscanthus recorded nitrogen levels dropping away as soon as the grass was properly established, Brown said. “It is less than 0.1kg/ha. It’s a dramatic change.”

Brown said Fonterra had previously investigated dried miscanthus as a fuel for its milk drying plants but it proved too light and fluffy for compatibility with its coal-fired furnaces.

However, Brown said his company now had samples of cubed miscanthus, machine-pressed into lumps of about the same density and size as coal.

The machinery to produce significant quantities of the cubed material was not yet available, but Brown hoped that Fonterra would eventually conduct a full trial. Although that’s not likely to be this year, Brown believed it would be successful and could lead to Fonterra planting miscanthus on a commercial scale at its Darfield and Clandeboye site­s.

The country’s total planted area of miscanthus might then at least double from its current estimated 45ha, Brown said.

Tony Oosten, programme manager, energy and utilities group at Fonterra, confirmed that Fonterra was looking into miscanthus as a fuel but large-scale plantings were only a possibility at this stage.

He said that a trial of the cubed miscanthus material would have to consider not just how well it was handled by the feed systems but also its burning characteristics, including whether it produced corrosive ash or undue amounts of hard deposits known as clinker, in the furnaces.

Meanwhile, Brown said another use for miscanthus well-suited to the current quantities planted in NZ was as bedding for livestock including horses and goats. A poultry farmer was currently keen on a trial.

“I know that’s going to go well because that’s what a lot of our colleagues overseas are using it for.”

Brown says miscanthus was also useful as mulch, and a trial on a Kerikeri feijoa orchard was showing promise in combating the guava moth pest.