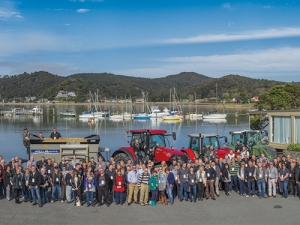 A record 153 people turned out at this year’s RCNZ annual conference in Paihia.

Rural contractors from around the country descended on the Bay of Islands in late June for this year's RCNZ annual conference.

I was delighted with the record conference turnout of 153, given the current economic climate. This is the largest turnout I can recall and it seems many rural contractors have decided to ignore the doom and gloom merchants and are looking forward to better times.

The conference had an exciting agenda of issues relevant and pertinent to the rural contracting sector and a number of top-line speakers. This year's theme was, 'Your Business from Start to Finish' and the event also celebrated the 20th anniversary of Rural Contractors NZ as an organisation.

We had an agenda chock-full of presentations focussing on how to get smarter in running your business and the use of the latest technology. Presentations over the three days included fuel management, insurance, taxation, ACC, machinery valuation, employment law, succession planning, looking after your workers and yourself, as well interactive sessions run by Debbie Mayo-Smith on enhancing the use of web, social media and smartphone apps for business.

However, it was not all serious business with a fair bit of fun as well. One of the highlights was former policeman and Police 10-7 host Graham Bell's entertaining and down-to-earth after-dinner speech on the Tuesday night.

At our Wednesday night dinner, conference-goers were given an informative address by Primary Industries Minister Nathan Guy, who covered the outlook for primary sector biosecurity, Brexit and rural mental health.

We also had our annual charity auction for St Johns that raised $21,000 for the ambulance service in the Bay of Islands.

Like many of us living in rural areas, rural contractors have a great affinity for the work of St John and RCNZ is proud to help support such a worthy and valuable charity.

The conference finished on the Thursday night with the annual RCNZ awards dinner and dance.

We had a fantastic conference this year and everyone is already talking about heading off to Queenstown to do it all again in 2017. If you have never attended a national conference before, I can highly recommend it. It provides a great opportunity to network with contractors from all around the country, learn new stuff and have a bit of fun as well.

The unpredictable world of elections, weather and rural contracting

Wet, wet, wet: that’s the message I’m getting from contractors all around the country.

Mixed bag around country for 2017

The new year has started with contractors and farmers nationwide more upbeat with the recent increases in dairy payouts and, generally, a more positive outlook for the agri-sector.

Despite wet weather in many regions, the outlook is encouraging and we are seeing plenty of good growth around the country as rural contractors start cranking up for their busy season.