Why beekeepers support the levy 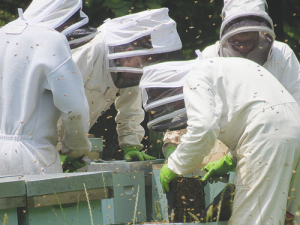 The levy aims to enhance biosecurity protection, fund research with the private sector and Government, and build industry skills and efficiency.

Beekeeper board members of ApiNZ outline why a commodity levy on honey is needed.

It was just three years ago the bee and honey industry voted to bring together all parts of the industry – beekeeper, packers, suppliers - under one professional organisation to build value and opportunity for members. The vision of that vote led to Apiculture New Zealand, which today has 900 members all focused on the good of the industry.

Growth in the industry has been phenomenal and we’ve all benefitted. Our challenge is to leverage the opportunity growth brings and minimise the problems with the growing pains. At the moment it’s the problems – falling prices for some honeys, bee health and ranging issues - that are grabbing our attention, but that won’t always be the case.

We need to set ourselves up for the future, not just today. ApiNZ is a strong professional organisation. With a levy it would be stronger. Every commercial producer, big or small, pays a levy and a small amount paid by a large number adds up to a meaningful investment in our future. A levy is a way of clubbing together to protect ourselves in the tough times and leverage opportunities in the good times.

We didn’t just pull the levy idea out of thin air.  We looked at our past experience with a levy. We talked with a lot of other levy organisations and consulted widely with beekeepers around the country. The result is very practical - a levy on honey (at 10 cents per kg), that builds sufficient resources to have a meaningful impact - enhance biosecurity protection, fund critical research with the private sector and Government, build industry skills and efficiency.

We won’t be doing things that companies should be doing for themselves such as marketing, but we would support research into some non-manuka honeys which could lead to greater value and better pricing for those honeys. When we last had a levy it funded important research into manuka honey and look at where that is today.

We understand that in the present climate affordability is an issue, but when the chips are down we have to invest in the future to create one. That’s the approach all other primary sector industries have taken with over 30 of them in New Zealand having a levy that builds robustness into their industry through investment in research, market development, biosecurity and training.

Having been without a levy in the bee industry for a long time this investment hasn’t happened so beekeepers are more exposed in these difficult times.

So what’s the alternative if we don’t do this? The alternative offered by New Zealand Beekeeping Inc. - a voluntary funding model – will not work.  It encourages free-riding leading to resentment by those who pay. A lack of resources means nothing important changes. That encourages ‘everyone for themselves’ behaviour. Do we really want to be in that space where fragmentation and self-serving behaviour between all parties just ends up in more conflict and little progress?

Let’s get back to what we’re facing as an industry and what we need to start doing about it, quickly. Do we want our loss of momentum to allow countries like Australia to move ahead of us? If they do it will be very hard to pull them back. Do we want to see more interventions by MPI and the Minister to save us from ourselves? No, we don’t because where might that end up? We want to be our own masters.

A “no” vote is like Brexit – it’s no good for anyone, including those who voted for it.

The commodity levy vote is closing at the end of next week (Friday 1 March) and Apiculture New Zealand. It is being managed by Electionz.com who have run most of commodity levy elections. We would like to remind all eligible beekeepers to get out and have their say. For any questions on the levy call Electionz.com on 0800 398 683