Australian trucking industry has the blues 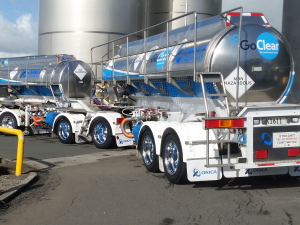 The shortage started when China reduced exports of urea.

The Australian Trucking Association is flashing its headlights to warn of a worsening situation with supplies of Diesel Exhaust Fluid (DEF) throughout the country.

DEF, more commonly known by the leading brand name AdBlue, is used post combustion in many truck, tractor and harvester engines to meet the latest emission regulations and reduce the problem of nitrous oxides being expelled into the atmosphere. Injected into the exhaust gas flow at a rate of about 6% of diesel fuel usage, AdBlue is manufactured from 32% high-grade urea and 68% de-ionised water.

Said to be a situation that has been brewing for around two years, the shortage issue started when China, the major global supplier of high-grade urea, reduced exports of the product. Not to be confused with agricultural-grade urea, that is not suitable for the process, the Trucking Association points out that there is no high-grade urea produced in Europe, meaning China, Russia and the United States controls supply. In the case of the latter, supplies also seem to be running out, with reports of engines being “re-mapped” to circumnavigate the problem

In trucks, tractors and harvesters, if the vehicle is “starved” of DEF, the engine will start to de-rate, by reducing horsepower, before it eventually switches to limp mode, making it unsuitable to carry out the designated task. Some industry insiders have suggested disabling the DEF process, while accepting at the present time this is illegal to do so. Whilst this might appear to be a simple solution, doing so will require the “re-mapping” of the engines electronic control unit (ECU), with the risk of causing potential damage to engine components and voiding any vehicle warranties.

ATA Chairman Dave Smith points out that the technology has been used in most trucks manufactured since 2010, so the problem is widespread. In the case of his own business his 22 trucks consume around 3000 litres od DEF each week. He comments, “our calculations and discussions with distributors suggest that without immediate action, supplies will run out some time in February.” With no domestic manufacture of high-grade urea, the Dept. of Transport is monitoring the situation closely and is asking trucking operators not to panic or stockpile supplies of DEF.

Here in New Zealand, the NZ Trucking Association CEO, David Boyce says, “at tis stage we are not aware of any supply issues for DEF, but of course, we are talking regularly with our colleagues over the ditch.”

We have a domestic production of DEF via Balance Agri-Nutrients, who produce the AdBlue-certified brand at its Kapuni plant in Taranaki. Ballance CEO Mark Wynne says the company’s role in producing DEF is vital to keep NZ moving. “We’re already seeing global freight challenges, so without GoClear (AdBlue) we could end up with domestic freight issues as well. NZ freight and transport industries could literally come to a standstill, causing major flow-on effects for many sectors - including food shortages, increased food prices and the interruption to the supply chains which sustain economies,” he says.

Although the Kapuni site is primarily focused on the manufacture of urea for nitrogen-based fertilisers for agriculture, it recently diverted significant urea production towards making GoClear (AdBlue) to meet demand.

Mark says, “In late November, we supplied one of New Zealand’s biggest AdBlue distributors with 1,000,000 litres of GoClear (AdBlue), at which time the domestic market was within days of running out of diesel fuel additive. We produced approximately six months’ worth of GoClear (AdBlue) in three weeks."

Staying alert when fuelling up

With harvesting season in full swing and long hours being worked, it’s timely to remind tractor and machinery operators about a frustrating and sometimes expensive issue around fuelling up – the utilisation of Diesel Exhaust Fluids (DEF).

With emissions regulations now requiring manufacturers to produce ever cleaner engines, the terms SCR and DEF have entered the vocabulary of today's tractor drivers.

With the increasing use of AdBlue as an additive to diesel powered vehicles to reduce exhaust emissions and with more storage needed, Sebco Fuel Storage Systems launched a new range of storage tanks at National Fieldays.