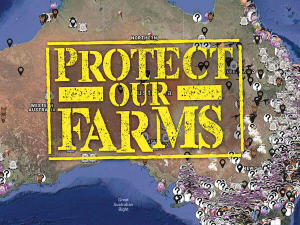 Spot fines of A$652 will be issued to people caught trespassing on farms. The government move follows an escalation of animal activism in Queensland.

Recently, an animal rights group Aussie Farms published a map showing the location of hundreds of farms and abattoirs, encouraging people to upload photos or videos of animal exploitation in a bid to influence consumer choices.

It lists the coordinates of people’s home farm businesses and other details, such as ABN numbers, which can be used to find more personal details about the owners.

He condemned animal activists for their radical and unjustified actions “which invade farmers’ privacy, threaten the welfare of their animals, pose unacceptable risks to their businesses and have implications for food security”.

“For many farmers, their property is their business, their workplace and their family home. As the frequency of these incidents increase, farmers are unable to operate their businesses and go about their lives for fear of being the next animal activist target.”

Queensland Minister for Agricultural Industry Development Mark Furner says people going onto a farm must now comply with the property’s biosecurity management plan when they enter or leave and while they are on the property.

“We have amended the regulations under the Biosecurity Act to allow Queensland Police Service and biosecurity officers to immediately fine people who put onfarm biosecurity at risk,” Furner said.

“This is a direct response to the growing incidence of unauthorised entry by animal activists to places where animals are kept. This can pose biosecurity risks including spread of diseases between humans and animals causing production losses that impact the business, supply chain and ultimately consumers.”

The gross value of Queensland’s production at the farmgate for livestock and livestock products for 2017-18 was A$6.784 billion, including cattle and calves, poultry, pigs, eggs and milk.

The Government claims a biosecurity harm caused by a person carrying or spreading a disease while entering, leaving or at a livestock production premises could be catastrophic to Queensland.

“There has been a well organised, well-funded campaign by animal extremists that has been terrorising Queensland family businesses in regional Queensland for months,” she says.