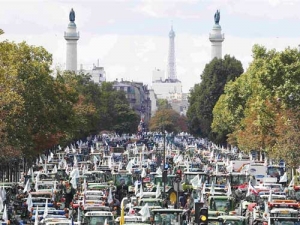 Angry French farmers with their tractors in Paris.

Prices for staples such as beef, pork and milk are being squashed by such as changing dietary habits, slowing Chinese demand and the Russian embargo on western products in response to sanctions over the Ukraine conflict.

French Agriculture Minister Stephane Le Foll estimates around 10% of farms in France – about 22,000 -- are on the brink of bankruptcy, together owing  NZ$1.7 billion.

Farmers’ unions have been negotiating with the Government, which in July unveiled an emergency package worth NZ$1b in tax relief and loan guarantees. But the farmers say this is woefully inadequate, as tales of farms going under and suicides hit the news.

After last week’s protest the French Government added $150m to the assistance package.

French Prime Minister Manuel Valls also promised a “break” in the environmental norms and a year-long moratorium on debt repayment by farmers.

He also announced a reduction in social charges and promised to pour more resources into helping farmers modernise and raise investment.

“Agriculture is our heritage, the identity of our rural areas,” says Valls. “Desperation is suffocating families.”

EU dairy, pigmeat, beef and fruit and vegetable growers are suffering enormously from the export ban imposed by the Federal Republic of Russia. Its trade embargo has cut almost $10b of agri-food exports.

“We welcome the EU Commission announcement to officially introduce measures in the coming weeks to support fruit and vegetable growers and dairy producers in the wake of the Russian crisis,” Maat said.

“But it is not nearly enough. There is an extremely difficult situation on the EU pigmeat, dairy, fruit and vegetable and beef markets.”

The FNSEA farmers union, which organised last week’s protest, says falling prices, including for dairy, meat and sugar, are pushing many members to bankruptcy.

Leader Xavier Beulin says his union’s goal was not to disrupt motor traffic in Paris, although he admitted there would be delays related to the protest.

“Our goal is to show the Government that we are a determined group.”

From New Zealand to France

New Zealanders Graeme and Julie Bott have created a successful wine estate in one of France’s most famous wine regions.

French look to work with NZ

A French research organisation studying the effects of climate change on viticulture, is hoping to partner up with New Zealand grape growers, through a collaboration with the NZWRC.

The stars and stripes are in our future

Recently there has been considerable media coverage of the news that New Zealand wine has become the number three imported wine into the US, with only France and Italy ahead of us.