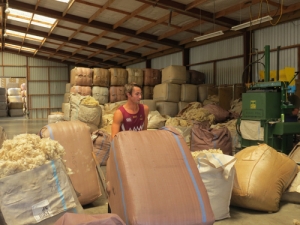 The weighted indicator for the main trading currencies was down 1.47% compared to the last sale on 11th June helping underpin local values.

Dawson advises that Finer Mid Micron Fleece were 3 to 6% easier with the coarser types firm to 2% dearer.

Fine Crossbred Fleece and Shears, which had been under pressure for the Chinese market, eased 2 to 6%.

Coarse Crossbred Full Fleece were firm in the South Island and ranged from firm to 3.5% cheaper in the North.  Longer Coarse Shears were 1 to 2.5% cheaper with the short types 1 to 2% dearer.

Long Oddments were firm to 3% dearer with short oddments ranging between 1 to 7% stronger.

The end of season sale was well supported with China, Australasia and the Middle East principals, supported by India, Western Europe and the United Kingdom.

The first sale for the 2015/16 season on 9th July, comprises approximately 9,400 bales from the North Island.